In every workplace there is a particular mentality which makes each job different, both in a positive and a negative manner. The sense is one of ‘how we do things around here.’ It has always been an attribute of a workplace, has always existed, and whether this attitude is conscious or not, it is central to giving meaning to work. This attitude is referred to as ‘corporate culture.’ Over the last forty years, there has been an important change in the way work, people and attitudes are considered, which has led to conscious changes in corporate culture and has had very serious consequences for people working in organisations.

The key difference between today and forty years ago is that today, corporations and businesses have realised that attitudes and feelings, specifically feelings about a job, are directly linked to the productivity and output of an employee. In research, this realisation has led to the creation of theories such as the Human Resource Management (HRM) theory, which describes how to manage the feelings, attitudes and behaviours of workers through a multitude of techniques, including modifying the layout of the workspace, organising team building trips and providing flexible working hours. HRM draws on the science of semiotics and psychology to understand how people think and respond to different signs, messages and environments. It then attempts to manage these factors within an organisation in order to produce the desired behaviour in an employee. 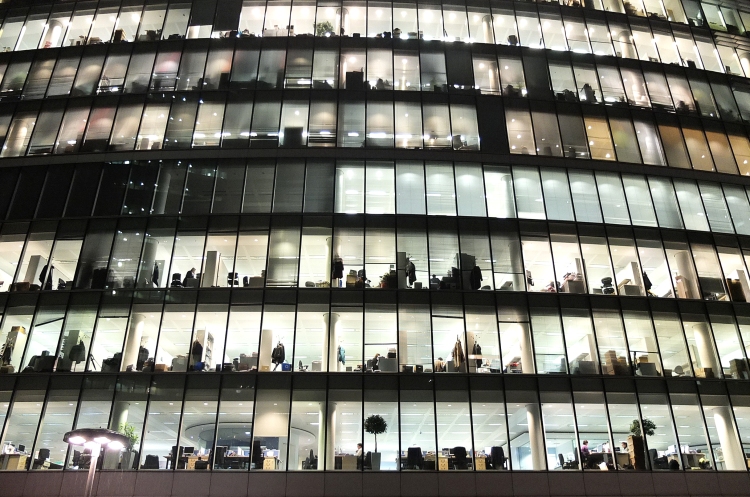 The facade of an office building, by Justin Lynham

The creation of open-plan offices with no cubicles is a classic example of how organisations change the environment in order to influence workers. These types of offices are designed to force employees to interact as much as possible, and to communicate through direct human contact rather than through impersonal email. The organisations try to create a social setting and to make people identify with each other as members of the same organisation, and therefore with the organisation itself. Some organisations claim to have introduced such office spaces with health in mind. Realising that physical activity improves concentration and productivity, they make people move around, and even build gyms and hire health coaches to council employees on healthy living, forcing a particular lifestyle on employees.

The attempts to influence employees’ behaviour are numerous. Besides creating spaces that encourage interaction, companies fill the workplace with pictures and cartoons reciting company values, create inspirational videos featuring well-paid actors hired to enact the role of the perfect employees, and even issue official guidelines as to how all members of the company are expected to work and behave. This latter type of initiative is common in the airline industry, in which air hostesses are often given a handbook to memorise. This handbook contains a detailed account of the vocabulary they are to use, as well as how they are expected to deal with customers, requiring them to always be humble, attentive and smiling, regardless of the situation.

The most interesting, and perhaps most disturbing organisational change, is less obvious. When organisations undertake culture change programmes and modify their workplace with employees in mind, their underlying goal is to internalise the values and thoughts of the employees, making sure that all workers think in the same way, work in the same way and live in the same way. Gideon Kunda, in his book Engineering Culture, describes how through the above mentioned initiatives, as well as making the workplace a place of ‘fun’ and creating a ‘family’ or ‘team’ mentality, organisations seek to control every little aspect of employees and of businesses.

All of this is done by companies as an attempt to instil a particular, uniform value and culture in the workforce. One might argue that the idea of making employees move around and communicate face to face, of training air hostesses to offer a uniform, high-quality service and making sure employees all adhere to similar values are necessary and worthwhile efforts.

However, this creates several problems. First, there is the unfortunate fact that employees who do not adhere to and internalise the values desired by a company are very often driven out of, or fired from their jobs. Several studies show that while labour laws protect individuals from this to an extent, firing employees on grounds of personality and participation in company life has become more and more common.

Second, it has been shown that controlling the environment in such ways does not lead to increased efficiency, and is closely tied to increased stress in the work environment. This is because the employees, realising they are being forced to do things they may not want to do, sometimes pretend to adhere to company values and behaviour, but in reality practice resistance by not working to their full capability.

Third, and most importantly, there is the ethical issue of trying to control the thoughts and behaviours of workers. Organisations are in a position of power in which they are able to influence and control the thoughts, opinions and personalities of people. The basic premise of HRM is higher productivity and a greater output for the company, which shows that a company generally has no interest in the well-being of its employees, and these initiatives have the sole purpose of creating a more profitable business, regardless of human cost. Companies only consider the well-being of employees in relation to its effect on performance.

Companies and corporations are in a position of power. They are in control of means of producing and selling, and they also have great power over their employees. It is therefore crucial to ensure that this power is not exploited at the cost of human rights. Having corporations in a position where they can control the way consumers and employees think and act is dangerous. The thoughts, behaviours, and lives of people are private and not be meddled with. Companies’ use of Human Resource Management theory to exploit psychological knowledge to control people is eerily similar to brainwashing, and must be condemned.