It is estimated by UNICEF that there are over 700 million women alive today who were married as children. To put this in perspective, that is roughly ten times the population of the United Kingdom, or double the population of the United States. Of these women, more than one in three was married before the age of 15. Not only is this a breach of these girls’ human rights, but also their rights as children, and it has a disastrous effect on every aspect of their lives.

This issue is not restricted to certain countries or religions, but affects children worldwide. While it is important to note that there are male children who are also forced into a marriage, these cases are far fewer than those of female child marriage. 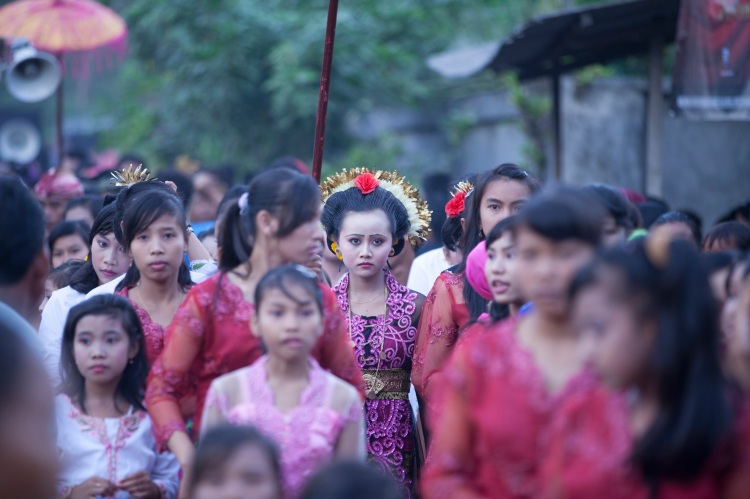 A 14-year-old bride in Indonesia, by UN Women Asia and the Pacific

Anti-Slavery International highlights the factors which indicate a forced marriage: the man’s belief that he owns the woman, abuse within the relationship,and the impossibility of being able to leave the marriage. This is based on the United Nations Declaration of Human Rights which, in Article 16, states that “marriage shall be entered into only with the free and full consent of the intending spouses.”

If a girl is under the age of 16 when she is married, as over 250 million women alive today were, the marriage can be seen as a form of slavery as it is not possible for a child under the age of 16 to give consent to marriage. This lack of consent indicates that child marriage is a very real problem.

Furthermore, child brides are often forced to carry out domestic work, and are often forced into having sex with their partners. This alone may be seen as exploitation, and therefore a breach of both their child and human rights.

If a girl is married before she reaches adulthood, every aspect of her life is seriously affected, from education to health, and this has been highlighted by the campaign Girls Not Brides. Girls who are married before the age of 18 are often removed from school, and miss out on vital education. Over 60% of women between the ages of 20 and 24 who have no education were married before they were 18 years old. Without education, a woman is denied the chance to learn essential skills that will give her self-sufficiency, and is therefore often at the mercy of men. A link can be formed between education and child marriage when looking at poverty stricken families. Often these families do not have the means, or do not see the point, in sending their girls to school. This leaves few options open to the family, and so marriage is often seen as a solution.

Perhaps one of the most obvious effects of child marriage is the impact that it has on the health of the girl. This impact is both mental and physical. Not only has child marriage led to the rise of HIV among adolescents – as child brides are often not taught about safe sex and are not in the position to be able to talk about it with their partner – but domestic violence is a very tangible reality. Girls Not Brides has calculated that 44% of girls between the ages of 15-19 believe that domestic violence is not only permissible, but justifiable. This shocking statistic rises when focusing on individual countries. This has obvious effects on the mental health of women around the world.

Every aspect of child marriage goes against the Convention on the Rights of the Child, ratified by 192 United Nations member states, which highlights the protection of children from exploitation and abuse. This has caused NGOs such as UNICEF and Save the Children to run campaigns and publish reports on the issue. While UNICEF has suggested that the rates of child marriage are slowing, this decline is outpaced by population growth and so the figures are still rising.

On the 8th of March, a new initiative to try and combat child marriage was launched by UNICEF and UNFPA. Executive Director of UNICEF Anthony Lake stated that “this new global programme will help drive action to reach the girls at greatest risk – and help more girls and young women realize their right to dictate their own destinies. This is critical now because if current trends continue, the number of girls and women married as children will reach nearly 1 billion by 2030 – 1 billion childhoods lost, 1 billion futures blighted.”

The initiative aims to empower girls through increasing their skills and giving them the ability to better support themselves and negotiate. It makes their education free and compulsory in order to maximise the number of girls attending school, and alleviates poverty through loans, scholarships, and subsidies for attending school, as well as offering vocational training in order to increase viable job opportunities. The emphasis of this initiative is placed on the education of girls, and this is due to the fact that education gives the girls an increased number of opportunities. Moreover, on the most basic level, girls who are still in school are often not seen as ready for marriage. Through increasing and strengthening laws which state that a bride must be over the age of 18, emphasising education, improving health care, and increasing economic support, this initiative hopes to aid the decline of child marriage. However, for many girls, this initiative comes far too late.

If you would like to learn more about this please visit the Girls Not Brides website, or read UNICEF’s report on the progress of ending child marriage.