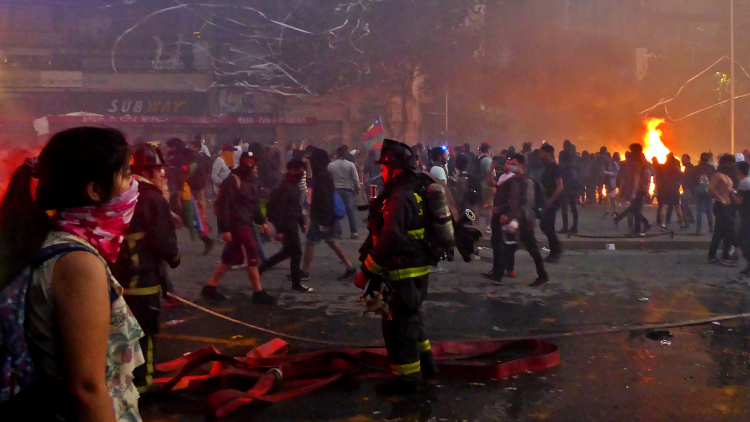 Within Latin America, Chile is one of the leading nations for the highest Gross Domestic Product (GDP) rates per-capita and is often lauded as an economic success story. Yet, Chile is also plagued by great economic disparity within the country. This contradictory situation at last culminated in 2019 with a period of ongoing civil unrest, and protests that have left as many as 23 dead. To understand the extreme discontent Chilean civilians are currently expressing, one must look to the underlying economic problems that many citizens face daily despite outward displays of wealth and prosperity on the national level.

A simple google search, and one is met with headlines such as ‘Chile’s Economy: the Way Forward’ and even ‘Why Does Chile Prosper while Neighbouring Argentina Flounders?’ Undeniably, in comparison to other Latin American nations, Chile touts one of the highest GDP per capita. The same can be said for , just behind Uruguay, with 16 145 dollars per capita. This is nearly a 6000 dollars above Argentina, the third ranking country, and more than double that of nations such as Ecuador and Bolivia. This impressive statistic has led many to believe that the economic success of Chile translates to prosperity across the country. During the 1980s, 1990s, and into the early 2000s, Chile’s economy consistently grew between 3.5% and 7.2%. Yet, this growth did not reach everyone. As recent as 2017, reports indicate that the wealthiest 20% earn up to 8.9% more than the poorest 20%. Within the Organisation for Economic Co-operation and Development (OECD), Chile’s gap between the highest and lowest levels of disposable income is one of the most pronouncedThe same can be said for the poverty rate, which in 2018 hovered at 16.1%, an issue that has seen little improvement since 1971, when a survey found 21% of the population to be living in impoverished conditions.

Why then, is Chile plagued by such inequality? Analysts have time and time again put Chile on a pedestal, the prime example of a nation that can undergo a successful economic transformation. Despite claims that past dictator Pinochet performed an economic miracle for Chile, his implementation of free-market economic reforms and privatization of the public sector did little for workers on the mid to lower-end of the socioeconomic scale; they had no ways to unionize for fair wages, and no government managed retirement system. Additionally, a report from Hernan Buchi, Chile’s minister of finance from 1985 to 1989, claims that ‘state assistance programs favored people who were not the poorest or most vulnerable groups in the country’. Although in the years following Pinochet, social reforms have revitalized Chile in the areas of healthcare and education, the free-market system remained a staple of Chile’s economy. Without proper regulation, only those at the top of the socioeconomic ladder were able to benefit from this economic system.

These deep-seated problems have come to a head in 2019. In mid-October, riots broke out in response to a 30 peso increase in subway fares. People took to the streets, burning buildings and vandalizing metro stations. Within a few days, President Pinera issued a State of Emergency and employed the use of the Chilean army, yet the riots continued to spread throughout Chile. These riots pose a humanitarian problem in themselves, with the numbers of dead, wounded, and arrested increasing by the day. The National Human Rights Institute ‘has filed twelve lawsuits against authorities for sexual violence including stripping detainees, groping, and threats of rape’. In response to the possibility of the obstruction of human rights in Chile throughout the riots and ensuing protests, the UN High Commission on Human Rights plans to send a team to investigate allegations of abuse against protestors.

Protestors gather in Santiago, Chile 2019. The phrase ‘Chile Desperto’or ‘Chile Woke Up’ has become a catchphrase for the 2019 events. Source: Wikimedia Commons

To manage the riots, President Pinera, who initially condemned the actions and moved to meet the resistance with armed forces, has backtracked with efforts to meet demands and quell the demonstrators. Pinera announced a series of reforms that include raising the minimum wage and health benefits financed by higher taxes on the wealthy. Pinera also condemned the actions of police against the protestors, agreeing that in some cases boundaries were crossed. Still, there have been calls for Pinera’s resignation as well as a referendum for a new constitution. A report from the OECD finds that for long-term economic improvements to be made, there ought to be ‘key structural reforms’ such as better public services.

The increase in the metro fare was merely the tipping point in a series of economic injustices that the majority of Chilean civilians have been facing for decades. The eruption of the 2019 protests displays some of the worst civil unrest seen in Chile since the end of the Pinochet dictatorship. The riots shocked much of the world, given many view Chile from an outside perspective of economic prosperity but remain unaware of the rampant inequality within the country. The current riots, protests, and general calls for change will only continue to have drastic effects on the population until an agreement can be reached.