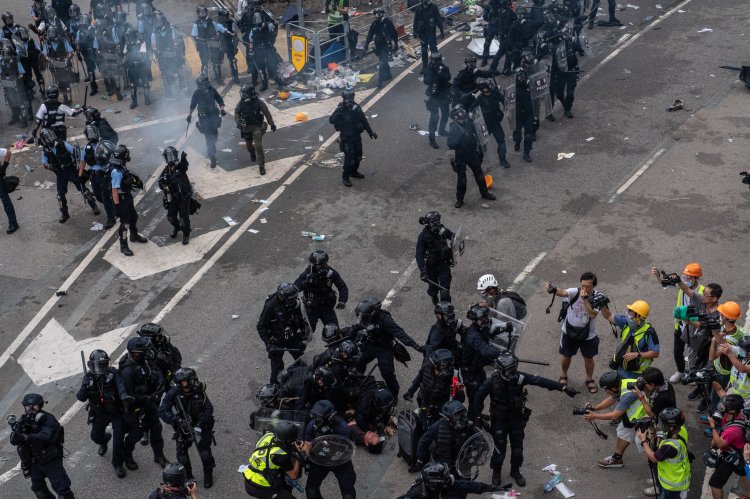 Protestors clash with police, via Lam Yik Fei for The New York Times

22 years ago, Hong Kong was handed back to China. The Chinese promise was that they would allow us to have our own autonomy until 2047, upholding the ‘One Country, Two systems’ until then. The recent proposal of an extradition bill backed by the government of the People’s Republic of China (PRC) challenges this in a fundamental way.

On June 9th, over 1.2 million protestors gathered in the streets of Hong Kong to protest what they see as a threat to the sovereignty of the former British colony that has been governed as a separate democratic entity from the PRC. Since the 9th of June, there has been a steadily increasing number of protesters, reaching around two million at another demonstration on June 15th. As of the 18th of June, the bill has been suspended but protestors will accept nothing less than the complete dismissal of the proposal.

The inciting issue was in April when the Hong Kong Security Bureau submitted a proposal to amend the extradition bill in order prosecute Chan Tong-ka, a Hong Kong teenager who was accused of murdering his girlfriend in Taipei before he fled to Hong Kong. The proposed amendment would extend the case-based surrender arrangements to cover the currently excluded “parts of the People’s Republic of China”. This would imply that the government would be able to handover fugitives to places with which the city has no long-term bilateral extradition agreement, including mainland China and Taiwan. The argument by Chinese officials is that this bill would allow the creation of a criminal safe-haven in Hong Kong. It is also noted that foreigners in Hong Kong will be applicable to the bill. Although the Chief Executive (CE) of Hong Kong will technically hold the final decision over the extradition to mainland China, it remains doubtful that he or she would be able to remain neutral under the pressure of the Beijing authorities due to the fact that the CE is both elected by the Beijing-dominated election committee and is accountable to Beijing according to the Basic Law of Hong Kong.

This has resulted in backlash from the people of Hong Kong because they view the bill as a way for China to increase their influence over Hong Kong by chipping away at their autonomy. The people of Hong Kong believe that actions including banning a pro-independence political party and barring activists from seeking elected office will follow in the immediate footsteps of the bill should it be passed. Moreover, it threatens the basic civil liberties that the people of Hong Kong, myself included, were promised. If this bill is passed, it could threaten activists, especially those who fight for independence, with a greater risk of extradition to the mainland. This is all because of their use of freedom of speech, which they are entitled to under the basic law of Hong Kong, in order to express their own views.

My family and I have been living in Hong Kong for as long as I can remember, and being far from home has made it difficult to comprehend the massive emotional toll and the disruption of people’s lives in Hong Kong. I am so thankful for my friends, family and everyone both in Hong Kong and in the international community who have been supporting us, protesting, or just trying to spread the word about the effects this bill may have. The protests are not for new legislation or drastic changes, but are protests to retain and cling onto the little autonomy we seem to have left. We are our own political entity by law and it saddens me that over two million bodies are not enough prove the people’s will and highlight of the intrusive nature the bill on our entire legislative system. However, the international attention has ensured us that we are not marching alone.