Since the 1980s, the cost of higher education has risen sharply, with severe consequences for students and society in general. While in the past paying the equivalent of $10,000 was possible for most, paying off student debt has become a lifelong process. It has now reached crippling levels, to the point where people in their 50s who have worked for thirty years still have not paid their student loans off completely. Tuition in an average non-profit university in the United States has increased by 300% in the last 35 years.

Student debt and extortionate fees are a problem because they leave citizens in a dire economic situation, particularly if the economy is not growing. Many graduates are unable to find a job, and if this goes on for long enough, it becomes impossible to pay off student debt. Inability to find employment and crippling debt lead to poverty. This means that the struggle of finding employment and simultaneously having to pay off a large debt marginalises people. It marginalises people because they are excluded from participating in basic socialising through their work, or through leisure activities, which they are unable to pay for due to their lack of employment. Furthermore, it becomes difficult for those individuals to sustain a basic living. Without a job, they are unable to pay rent, and may eventually be without a home. It may be possible for them to find refuge with friends, family, or the state, however these arrangements are unsustainable. On top of this, evidence suggests that being idle along with the pressure of debt increases the risk of committing crimes of desperation. This is both undesirable and costly to society as processing criminals and dealing with crime is very expensive. 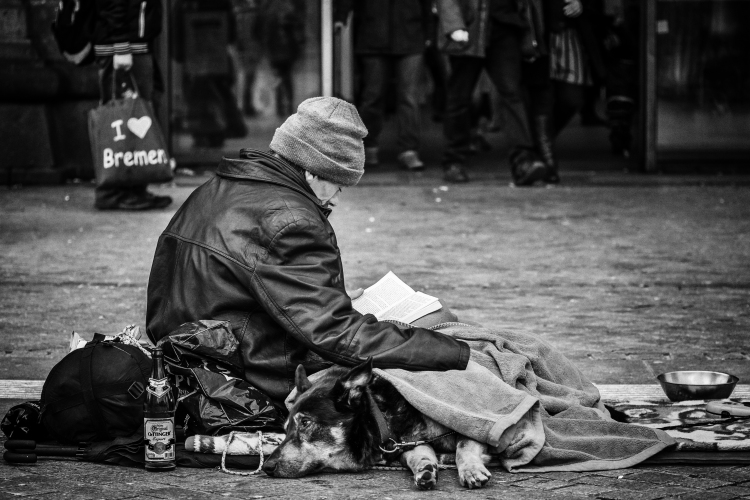 A homeless man reading on the street, by Per Gosche

Furthermore, tuition has become so expensive that it is now prohibitive. This means that people choose to not get a higher education because it is unaffordable. In the United States, low levels of education mean obtaining a job that offers a decent wage is very difficult. This means that those who cannot afford to pay the tuition, typically people of middle or working class, are unable to obtain a well-paying job and improve their living standard. This implies that the concept of the “American Dream” is flawed, and that in fact cannot simply work one’s way to the top is highly unlikely. It also implies that social class and poverty are perpetuated by the lack of affordable education. This means a serious restriction of freedom and social mobility, ensuring that those who have wealth and can afford education continue to be wealthy while others are denied the opportunity to attain that wealth.

The massive cost of providing free education for a whole country is often used as a reason for why it is impossible to do. While it is true that the US Federal Government spends billions on education, government spending reports show that only around 4% of federal spending goes to education. This is unsurprisingly lower than the percentage proportion assigned to education in countries like Sweden or Denmark, however it is also lower than less economically developed countries, like The Gambia and Djibouti. This suggests that rather than a monetary constraint, not providing affordable education is a choice. Often this choice is argued for by suggesting that some degree programmes are useless, that it cannot be the taxpayer’s responsibility for someone else to do a degree with which they might not earn much. This assumes, however, that some knowledge is useless, which couldn’t be further from the truth. It is also argued that affordable education is accessible to everyone through grants and cheaper in-state tuition fees. While this mitigates some of the problems of obtaining education, it does not go far enough. Only a small proportion of potential students are eligible for financial aid, and while in-state tuition might be lower, out-of-state tuition is sky-high.

In a modern democracy, in which heads of state are elected, surely it is of interest to everyone that people have equal access to education on all levels, in the hope that it leads to a more informed and critically thinking electorate. This is not to suggest that without education it is impossible to have an informed opinion, however increased education makes active research and increased reasoning in the election process more likely. Through education, one can gain a broader insight into the dynamics of business and society. This means holding governments and corporations accountable becomes much more likely.

It is true that providing affordable education requires a shift in priorities, however that shift is necessary. The Scandinavian countries, in which all types of education are paid for by the state, show that this is possible. In Denmark, students are even given a living wage; they are paid to obtain an education. While the US faces different and more complex challenges than these countries, affordable education is achievable. One might not agree with tax levels in these countries, however they are highly developed, highly modernised, and very functional societies. Government expenditure figures suggest that tax levels need not be raised, so surely it would be worth learning from them in this regard.

Education is necessary for a society to function at a higher level, and it goes a long way to reducing inequality, lack of opportunity and want. It reduces societal constraints, it gives people the tools to success and it improves society as a whole. Education is a human right, and making the cost of education a heavy burden or denying people education through extortionate tuition fees is a violation of those inalienable rights.