The room feels almost like the waiting area at a doctor’s office. Rows of seats with armrests dividing them, 5-foot-tall translucent dividers between waiting areas, a check-in desk with two women being only as nice as they have to be. There is even a vending machine and a children’s play area, complete with games and a television playing cartoons. A row of offices faces the seating area. Every once in a while a number is called over the speaker and a person gets up from the seats and goes into one of those offices, looking grim.

Only this is no doctor’s office. This is Lunar House, the headquarters of UK Visas and Immigration. 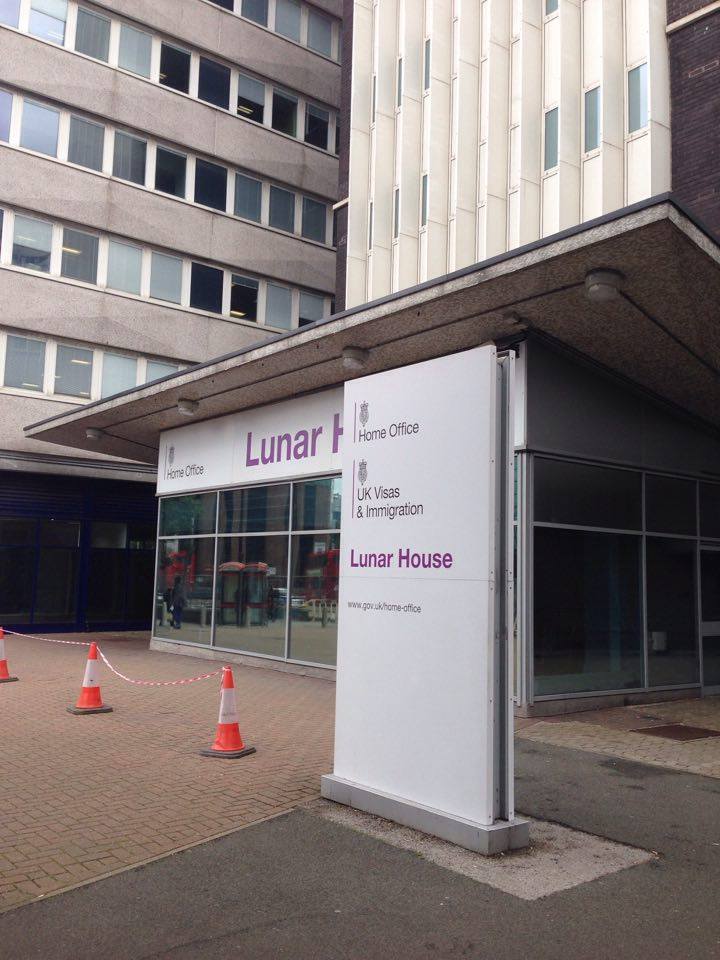 The outside of Lunar House by Emma Middleton

This imposing tower of offices with airport-level security checks in Croydon houses the United Kingdom’s asylum screening unit. Asylum seekers who apply from inside the UK are given appointments for interviews, fingerprinted, questioned, and possibly detained at this center.

In the UK, asylum seekers first go to an interview where they provide the Home Office with documents and have a preliminary interview to explain their case. Some are then detained. Next, the asylum seeker is given an in-depth interview, alone, possibly with an interpreter. They must have ‘evidence’ of what has happened to them. The only person allowed in the interview with them is a legal representative. Then, usually within 6 months, the decision is made. Some will receive permission to stay as a refugee, some under humanitarian grounds, and others will be asked to leave the UK. You can appeal against the decision within 14 days, in which case you can request a hearing, in public, for 140 pounds.

While I was waiting with an asylum seeker at Lunar House, sitting in the waiting room while he had his interview (I was expressly not permitted into the interview room), I attempted to talk to the other asylum seekers waiting there to find out if they had legal aid or if we could help them in any way. There were around 50 people in that room. Only one of them, a young man from the Caribbean whose father had had a stroke that same morning, even responded to me. The rest either did not speak English or were wary of talking to me, avoiding my eyes, unsure of what I was doing breaking the silence that surrounded the waiting room. I did not blame them. These people were waiting to recount the worst times in their lives in front of jaded officers who have heard it all before. The anxiety in the room was palpable.

Most people will never set foot in Lunar House, or indeed any of the other asylum offices around the world. I was only allowed to go as part of my summer internship at Rights in Exile.

For the past six weeks, I have been working to help asylum seekers receive legal aid in the UK. Legal aid is paramount when registering an asylum claim. Legal aid providers strengthen cases through documentation and years of experience, giving asylum seekers a better chance of having their cases be accepted by the home office. However, many asylum seekers either do not know about the possibilities available to them or do not think they will be able to afford it. Our goal is to make sure that information about pro bono legal aid and contact details for country of origin information experts is easily available to them on our website.

Many different components come together to form a good case. First, and most importantly, is the witness statement from the asylum seeker. This outlines their entire life, beginning briefly with their family and early life before turning to the exact details of the suffering they have endured and how they have come to be in the UK. They need to provide documentation to then back up their statement, from letters regarding past employment to YouTube videos of certain incidents. They also need an expert to write a country of origin information report detailing the situation in the asylum seeker’s native land. Sometimes, a medical-legal assessment, which documents the asylum seeker’s physical (such as scars from torture) and/or mental (such as PTSD symptoms) health as objective evidence to support their claims, is needed. Other times, a special report about certain issues affecting the asylum seeker such as witchcraft, female genital mutilation, or LGBTI issues will be used to back up their claims. Without having someone who knows the system on their side, many asylum seekers will have their claims rejected for not being able to prove that what caused them to flee their country even took place.

I am, of course, not qualified to provide legal aid myself as a mere undergraduate. However, I have done what I can to make it easier for asylum seekers to get in touch with legal aid providers and to help specific cases as best I can. I have contacted people from around the world to be country of origin information experts and pro bono legal aid providers for our website; taken an asylum seeker’s testimony, listening to them recount the journey that has taken them from their country, across the Mediterranean in one of those inflatable boats that seem to be on our screens constantly these days, and eventually to the UK; translated original documents from French and Arabic to be used in asylum seekers’ cases; and helped organize legal assistance to be waiting for a refugee when they landed in another country.

The most lasting impact for me has been the ability to meet asylum seekers and refugees from around the world and to hear their stories first hand. Seeing photos of a gay Ugandan’s bloodied face after he was beaten up for his sexuality. Hearing an Egyptian speak of the inflatable boat he spent nearly two weeks in, slowly running out of water, before being rescued. These might sound like familiar narratives, but to hear someone tell you firsthand what they’ve been through is a heart wrenching experience. It makes you realize how important it is for these asylum seekers to get the help they need to be able to stay in the UK and not be deported back to a place that has caused them so much pain.

Although recent rhetoric from the likes of Donald Trump and Nigel Farage might make people think otherwise, there is no such thing as an illegal asylum seeker. Article 14 of the Universal Declaration of Human Rights states that “everyone has the right to seek and to enjoy in other countries asylum from persecution,” while Article 31 of the 1951 UNHCR Convention Relating to the Status of Refugees adds that states “shall not impose penalties, on account of their illegal entry or presence, on refugees who, coming directly from a territory where their life or freedom was threatened… enter or are present in their territory without authorization.” These politicians exploiting the so-called ‘migrant crisis’ to promote nationalistic, xenophobic, and oftentimes racist views amounts to more than scaremongering. It contributes to the general population’s growing dislike of asylum seekers and migrants and does absolutely nothing to help the people who need it the most.

In spite of all of the hate circulating around nowadays, I have been consistently amazed throughout my time with Rights in Exile by the number of people who are willing to lend a hand to those in need. From academics agreeing to work pro bono as country of origin information experts to people who selflessly open their homes to asylum seekers who have nowhere else to go, people around the world are showing that the divisive rhetoric will not win. The asylum seekers I met throughout my internship are not a part of a homogenous group of people determined to steal the jobs of British citizens. They are individuals. They each have a unique story of determination and resilience that has led them to the UK in need of asylum. We must change the way we think about them and realize that they are people, just like you and me, going through the worst times in their lives. We would expect them, as fellow human beings, to open their doors if we were the ones knocking. So why do we think it’s acceptable to leave them out in the cold?