In their Strategy to Combat Transnational Organized Crime, The US National Security Council defines said criminal organisations as:

It’s a somewhat complex definition. But to deconstruct it a little, transnational organised crime groups are usually characterised by:

Basically, organised crime is bad. We know this. We are conditioned to believe it from a young age. We hate Captain Hook and his pirate cronies with a passion as soon as we are old enough to boo; we jeer as Scooby’s enemies are foiled, relishing their bitter cries (I would’ve gotten away with it too, if it weren’t for you meddlesome kids – and your dumb dog!). Of course we do. Organised crime facilitates poaching, slavery, the trafficking of sex, arms and drugs, and money laundering. Drug-related violence in Columbia has at times reached levels characteristic of small civil wars; the illicit trade in toxic waste poses a serious environmental threat; and there even exist known instances of collaborations between transnational criminal organisations and terrorists.

But bear with me while I argue that it isn’t as black and white as your favourite old gangster movies.

Because ultimately, a mass of human rights abuses are being perpetrated by ‘legal’ transnational and multinational corporations as well. If organised crime is characterised by violence, then allegations against UK company Gamma that it sold invasive surveillance technology to be used by the Bahrain government to target, arrest, and torture human rights activists, would see it fall into this category. If by intimidation and forced labour, then FIFA’s treatment of migrant workers on the Khalifa international stadium in Qatar, including the confiscation of passports, false promises of pay, and the use of threats to respond to complaints, would qualify it. If by the exploitation of foreign laws more amenable to high profits, then brands such as GAP, H&M, and Primark associated with the Rana Plaza sweatshop which collapsed in April of 2013 and took with it 1138 lives, are certainly guilty. And if it is defined by the organisational insulation from of leaders from persecution, then so are an entire horde of businesses around the world, as well as governmental institutions, and probably your next door neighbour. Of course, these cited examples are merely the tip of the iceberg.

TNCs place profit above all else. In response to criticisms pointing this out, the idea of ‘corporate social responsibility’ has come about – but this in most cases appears as a shallow posturing and certainly does not (or cannot) atone for the aforementioned atrocities. For example, several firms with large African workforces offer to cover the costs of workers’ HIV/AIDS treatments, which looks and of course is honourable – but one notes that it also benefits the company by increasing productivity and recruitment. In this sense, it is just good business. And it is a strategy recognised, too, by organised crime groups. For, as recognised by the US National Security Council, these groups are self-perpetuating; they have an interest in survival. And sometimes, those interests necessary for survival will converge with those of the state, government or population. For example during WWII, the US mafia guarded the waterfront against German sabotage. Furthermore, in seeking long-term stability criminal organisations may invest large amounts of wealth (procured illegally) into the local economy, such as through tourism or commercial real estate. They may even provide services that the state has failed to, such as schools and hospitals, to further embed themselves in their local communities. In essence, it is their desire to perpetuate themselves, rather than legal institutions that nevertheless prevents them from undertaking highly destructive actions or certain violations of human rights. Further still, their inherently lucrative activities can actually very much improve the lives of those living in communities in which goods and services and other means with which to support themselves are severely lacking – in which the ‘shadow economy’ is really the only functioning economy. These are the ‘virtues’ of the criminal world, unsung by governments and the mainstream media. 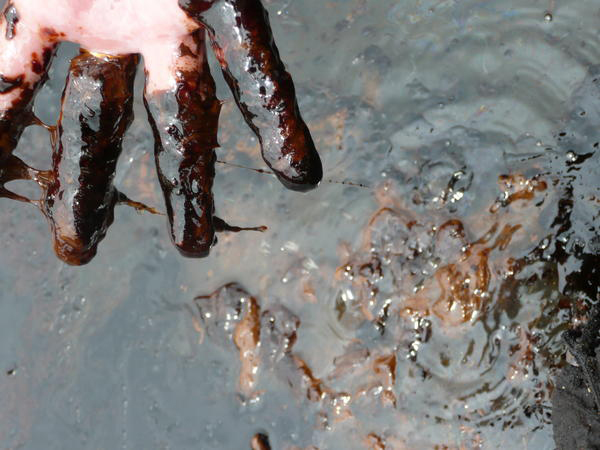 An Amnesty International mission delegate’s fingers covered in oil from an oil spill in the Niger Delta, by Jenn Farr

My goal in writing this article is not to convince you that we should be supporting transnational criminal organisations. I am merely postulating that the terms ‘legal’ and ‘illegal’ may not be helpful, or to go further may actually be unhelpful, binaries in their categorisation. This is demonstrated in the case of Shell and its oil spills in the Delta. An investigation carried out by Amnesty International revealed an array of bad practice, denial, obfuscation and misinformation by the oil company. They failed to address equipment failure and pipe corrosion for years, attacking illegal activities in the region as the source of the majority of oil pollution – claims that have been comprehensively discredited. After a lengthy legal battle Shell has now paid reparations of £55 million to the people of Bodo, Nigeria, and acknowledged its negligence. But the thing about the health of both people and the environment is that it can’t be bought back – and the company has yet to clean up the over fifty-five million litres of oil it has spilled in the Niger Delta since 2007. In cases such as this, both the demonisation of crime groups and the idolisation of TNCs serve together to aid a TNC in its misconduct: evil criminals provide a ‘scapegoat’ with which to hide behind; and principled companies are entrusted with reporting on their own processes and outcomes. Shell was able to mask its inadequacies for years by dominating the investigation and reporting of its own oil spills. Of course, you may insist, there do exist independent bodies for the regulation of company behaviour, but these too are clearly inadequate. To this day in the UK the ‘impartial’ evaluation of alleged breaches of the international standard of conduct is entrusted to the Department of Business, Innovation and Skills – an institution which exists primarily to promote the interests of UK businesses. Thus not only must we question the reliability of businesses said to adhere formal rules and regulations but the very laws and law-makers themselves, and their potential motivations. If we want to put an end to the current system of mass human and environmental exploitation then we must stop associating ‘legality’ with ‘trust’.

Sign the petition to ensure UK companies are held accountable for human rights and environmental abuses at home and abroad here.