The United States prides itself on being a champion of human rights around the globe. But what happens when human rights become an issue within its own borders?

On August 9th, 2014, white police officer Darren Wilson shot dead unarmed black teenager Michael Brown in Ferguson, Missouri, USA. We do not yet know exactly what happened in the minutes leading up to the shooting of Michael Brown, but the racial tensions within the case and the way the case has been handled by the Ferguson police department is concerning to say the least. First, they refused to release the name of the officer involved until August 15th, 6 days after the tragedy, and only apologized to his family for leaving his body in the street for four hours on September 25th, over a month after he was shot.

However, the most appalling aspect of the actions taken by the Ferguson police department is their response to protestors. Members of Michael Brown’s community held mainly peaceful protests, demanding the arrest of the officer responsible and condemning the actions of the police and investigators. Police showed up to the protests with tanks and assault rifles, looking more like soldiers in combat than police officers responding to mostly non-violent protests. They then threatened protesters and fired rubber and wooden bullets as well as tear gas into the crowds.

Whilst America prides itself on freedom of speech and press, journalists and anyone with cameras have said they were forced to stop recording, even though it is legal to film police in the United States. Reporters who have been arrested while filming include Ryan J. Reilly of the Huffington Post and Wesley Lowrey of the Washington Post, who state that they were detained and assaulted after filming police officers inside of a McDonald’s in Ferguson. They were later released without charge. The press and police intervention situation became so dire that Amnesty International sent a delegation to monitor the situation, the first time such a delegation has been deployed on American soil.

These issues of human rights, freedom of press, and racism in the United States are hard for some Americans to understand. Despite leaps forward in the past 50 years the United States still struggles with racism and poverty. However, many white Americans either don’t know of or refuse to acknowledge the issue. Some social activists in America have taken Ferguson as a sign that now is the time to address these prevailing issues head on, believing that opening up a conversation about race relations can help to remove racism from the fabric of American society. However, some countries that America has been pressuring over their human rights abuses have responded to Ferguson in a very different way.

“The Ferguson incident once again demonstrates that even if in a country that has for years tried to play the role of an international human rights judge and defender, there is still much room for improvement at home,” reports China’s state news agency Xinhua. “Obviously, what the United States needs to do is to concentrate on solving its own problems rather than always pointing fingers at others.”

Interestingly, however, reports on Ferguson feature only on the English-language version of Xinhua, save for one article on the Chinese-language site that touches only briefly on the unrest. This suggests less of an interest in human rights abuses in the United States and more of an interest in shaming the United States for its hypocrisy in reporting on Chinese human rights abuses while ignoring inequality at home.

Another Chinese paper that is controlled by the ruling communist party, The Global Times, has stated that “it’s ironic that the U.S., with its brutal manner of assimilating minorities, never ceases to accuse China and countries like it of violating the rights of minorities,” as reported in USA Today. Though China does not allow either domestic or international coverage of unrest in its own country, state broadcaster CCTV and Xinhua both sent reporters to Ferguson.

Ferguson has also been reported upon by Russian officials, who have been urging “our American partners to pay more attention to restoring order in their own country before imposing their dubious experience on other nations” according to the LA Times. After recent tensions over Ukraine, Russia’s jab at the United States comes as no surprise.

Ayatollah Khamenei, the Supreme Leader of Iran, tweeted about the protests in Ferguson in an obvious rebuttal toward the United States’ rhetoric toward Iran. “Today the world is a world of tyranny and lies. The flag of #HumanRights is borne by enemies of human rights w/US leading them! #Ferguson.”

Whilst these responses are to be expected from those countries the United States has called out for their human rights abuses, it is still interesting to see how these criticisms will be responded to by the American government. They also raise important questions about whether or not the United States can claim the place of worldwide human rights defender without first looking to inequalities within its own borders.

Though tensions were seemingly running less high as the protests petered out, the destruction of Michael Brown’s memorial on the 23rd of September has sparked fresh unrest in Ferguson. The United States and the Ferguson police department will need to handle these protests with care to avoid more calls of hypocrisy from around the world. 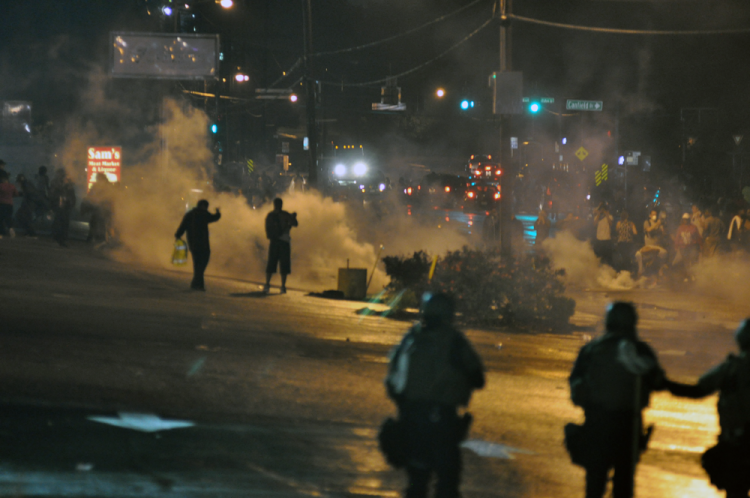 There is, however, a positive response to Ferguson often overlooked by the mainstream media. As soon as Twitter began to blow up from Ferguson protesters claiming to have been tear gassed, Palestinians were tweeting back advice in solidarity.

“Always make sure to run against the wind /to keep calm when you’re teargassed, the pain will pass, don’t rub your eyes! #Ferguson Solidarity” tweeted Mariam Barghouti a few days after the protests began.

Why is it that people from a state that is not recognized by the United States are the most vocal supporters of protesters in Ferguson? Is it because empathy can only be expressed towards those you feel connected to, whether by ethnicity, nationality, or experience?

As Rajai abuKhalil tweeted, “[i]t is always, the oppressed caring for the oppressed. No matter where in the world. #Palestine stands with #Ferguson.”