While heavy rain poured outside on Thursday, 11 October, students and members of the Lafayette Club committee gathered in the society room of St Andrews’ Hotel du Vin Thursday evening to hear Noel Lateef speak on the importance of conflict prevention in the 21st century. Mr Lateef, longstanding president of the Foreign Policy Association based in New York, came to St Andrews as part of the Lafayette Club’s speaker series that seeks to bring world leaders and industry experts together with university students. 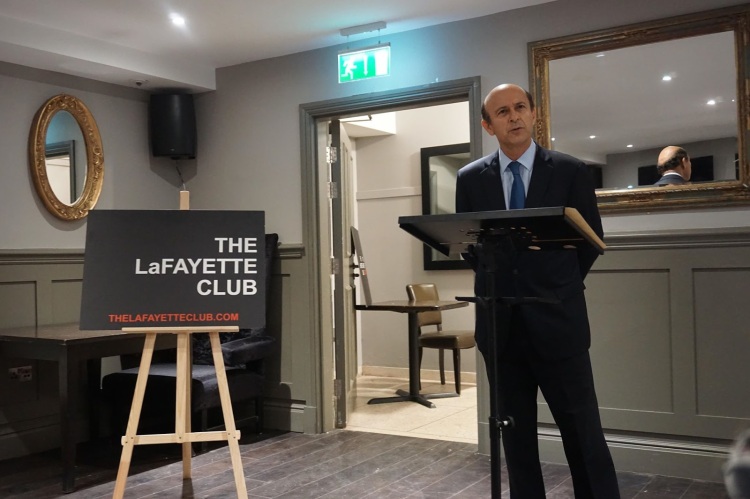 Noel Lateef speaking on the importance of conflict prevention. Source: The Lafayette Club

The Foreign Policy Association is a New York based private, nonprofit, non-partisan educational organization which is devoted to the education of American citizens in international affairs. At its founding in 1918, the association was known as the ‘League of Free Nations Association’ and was established to support US President Woodrow Wilson’s vision of world peace as described in his famous Fourteen Points speech. Additionally, its American founders hoped to increase support for United States’ membership in the international organization described at the time in the Versailles Treaty and Paris Peace Conference of 1919.

Today, the organization has built upon its roots as an arena for supporting policy to becoming an educational body more generally. Not only does the organization seek to develop a deep awareness and understanding of how global issues affect the United States, but also to teach citizens media literacy in order to craft informed decisions on foreign policy. Beyond education, the Foreign Policy Association is often the principal venue for foreign policy addresses by presidents and foreign ministers from around the world.

With 24 years of experience as president of the Foreign Policy Association and as author to a number of publications, Noel Lateef was able to share both personal and professional insights into how to navigate the increasingly multi-polar international political system from a lens of conflict and conflict prevention. While Mr Lateef’s speech largely focused on the role of the United Nations as a body that promotes conflict prevention, he also offered personal anecdotes on his journey to becoming president of the Foreign Policy Association.

As the son of an American foreign service officer, international politics have always been heavily imbued in Mr Lateef’s life. For his bachelor’s degree, Mr Lateef attended the Woodrow Wilson School of Public and International Affairs at Princeton University where he graduated magna cum laude. During this time, he pursued an internship at the US State Department, which he said changed his mind about pursuing a career in foreign service. Instead, he then went on to study public policy at Yale Law School before working for a judge on the U.S. Court of Appeals for the 9th Circuit and later as chairman of the Bowery Savings Bank.

Mr Lateef’s 45-minute speech opened with an anecdote about the Japanese Prime Minister that both highlighted the Foreign Policy Association as an esteemed arena for foreign politicians and showcased the organization’s direct effects on policy matters. In this specific example, the prime minister was misquoted in his speech, sponsored by the Foreign Policy Association, by the media which then led to front page headlines and a hefty drop in stocks that very day.

While a large part of Mr Lateef’s introductory remarks consisted of his past experiences and narratives about various visitors and speakers to the Foreign Policy Association, his speech quickly narrowed in on his ideas surrounding conflict and conflict prevention in the 21st century. He stressed that conflict prevention is crucial for determining whether human civilization will still exist in the next hundred years. While conflict has been a pressing issue for civilization for thousands of years, in this age of globalization and rapid modernization, conflict has become all the more detrimental, not to mention the growing implications of global warming on why and how modern conflicts will be fought.

Staying true to the origins of the Foreign Policy Association, Mr Lateef discussed at length the history of the United Nations in peace building and its important role as a preventer of conflict. Mr Lateef strongly believes that conflict prevention rests heavily in the prioritization of education, which he pointed out is an ideal upheld in the preamble to the United Nation’s Education, Scientific, and Cultural Organization’s (UNESCO)constitution: ‘since war begins in the minds of men, it is in the minds of men that the defences of peace must be constructed’.

Although conflict still persists, Mr Lateef did highlight the ways in which society has improved its abilities to prevent conflict ranging from the early detection of danger, accurate and fast information collection, cooperation between across countries and agencies, fast action, and early mediation. Mr Lateef’s speech ended on a somewhat positive train of thought, which stressed both the progress made and the importance of imagination. The talk concluded with Mr Lateef arguing that the end of the Cold War should be the most esteemed example of the art of the possible.

Overall, Mr Lateef’s speech was extremely informative and equally eye-opening. It should be said, however, that the potency of Mr Lateef’s message may have been lost at times in the overuse of anecdotes and in-text quotes that occasionally seemed to not have a clear connection. Nonetheless, Mr Lateef is an extremely intelligent and insightful speaker who joins the esteemed ranks of the Lafayette Club’s speakers.