Contrary to what recent headlines suggest, the caravan of migrants from Latin America traveling north is not a brand new event. Though the 2018 group is the largest yet, estimated to consist of above 1,000 individuals, this organized journey has been occurring since 2010, through the organization Pueblo Sin Fronteras. Pueblo Sin Fronteras facilitates group journeys for migrants looking to escape poor conditions in their home states, who are either seeking asylum or attempting to immigrate to the United States or Mexico. As a humanitarian aid organization, Pueblo Sin Fronteras states that its goal is to advocate for international solidarity and more open and sympathetic borders; to allow entrance for those individuals with nowhere else to turn.

The idea behind an organized group journey is to alleviate some danger on the long trip, through the simple principle of safety in numbers. Pueblo Sin Fronteras has its own organizers to handle logistics, and each individual is responsible for their own provision of food, water, and funding for transportation, should it be necessary. Groups are created by Pueblo Sin Fronteras; each composed of about 15 individuals under one leader. Five groups are then organized into a sector. This is how the caravan is structured and maintains order as the group moves northward. 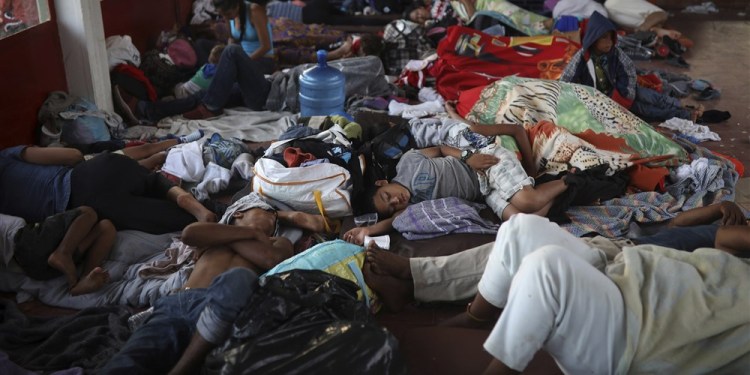 The individuals within the caravan are predominately Honduran or Salvadorian. Both countries are part of what has been dubbed the ‘violent northern triangle’ of Central America. Additionally, both have been ranked among the world’s most violent countries – it is obvious why many would seek to leave, by reputation alone. Individuals from El Salvador and Honduras, as well as others in the caravan cite poverty, violence, lack of opportunity, civil unrest, and corruption as reasons which led them to make the decision to pursue a life elsewhere. At least 300 of the roughly 1,000 people of the caravan are minors. Families, women, and LGBT youth are also among those noted as significant demographics. It is easy for commentators to paint the members of the caravan as either victims fleeing circumstances out of their control or criminals trying to illegally enter a state. It is crucial to keep in mind the tension between the agency these migrants are demonstrating by choosing to seek a better situation, which shows that they are more than passive victims, and the circumstances that pushed them to take such a drastic step and leave their country of origin, which illustrates that their decision to seek a new home was motivated by necessity, not criminal intent. Neither victim nor criminal is the appropriate label to slap on the group, as there are complex factors involved in their current circumstance.

The goal of many traveling with Pueblo Sin Fronteras is to present themselves to migration officials in either Mexico or the United States as asylum seekers. Though under Mexican law, Central Americans who legally enter the state can move freely once within, this does not grant them official status as citizens or immigrants. The immigration process, as well as the process of being declared an asylum seeker, are both complicated. Increasing media attention due to current immigration debates only intensifies the scrutiny on the current Pueblo Sin Fronteras group, worsening the uncertainty of their position in limbo between states.

As of early April, Pueblo Sin Fronteras declared that the caravan would halt in Mexico City, instead of at the United State border as planned. Leaders cited the reason for this as concerns for the high numbers of children within the group, as the next stage would involve dangerous travel by freight train. Some of those who remain in Mexico City will be allowed to stay within Mexico, while, heartbreakingly, some that have traveled so far will be returned to the countries they left. Doubtless some individuals will make the choice to attempt to remain in Mexico illegally, while others may continue on to the US border to seek asylum or illegal crossing. The futures of the travelers and Pueblo Sin Fronteras as an organization are difficult to predict, but the international attention this year’s caravan has received certainly means a change of situation for the organization and its future groups.