Since the Taliban seized control of Pakistan’s Swat Valley in 2007, they, and other militant groups in the area, have systematically campaigned against the region’s educational institutions, particularly those catering to girls, by way of violent attacks. Many of these attacks have been highly publicized, including the December 16th, 2014 Peshawar massacre that resulted in a death toll of 132 children and the October 2012 shooting of teen activist and Nobel Peace Prize winner Malala Yousafzai. Despite the media coverage of such incidents, the devastation left in the wake of these conflicts remains prevalent among children, parents, and teachers to this day. This was highlighted in last week’s release of a new report by Human Rights Watch, which contains 48 interviews detailing attacks between January 2007 and October 2016. This 71-page report not only illustrates the physical destruction caused to school buildings and the violent attacks targeting teachers and students, but it also scrutinizes the presence of security forces, political groups, and criminal gangs within the schools.

Beginning in 2007, over 900 girls’ schools were violently forced into closure by the Taliban’s campaign, resulting in the disruption of the education of over 120,000 girls and the loss of 8,000 female teachers’ jobs. Even more harrowing, however, is the fact that many girls and female teachers have yet to return to school or work, despite the Pakistani army’s displacement of Taliban forces. According to Al Jazeera reporter Kamal Hyder, those who have returned, or are planning to do so, “still live in fear because of the bitter memories of the conflict.”

The initial response to events like the Peshawar killings only served to perpetuate the idea of societally acceptable violence, with the Pakistani government issuing arms licenses to teachers. Arming teachers in government-run schools as an attempt to enhance security measures is a highly controversial route to take. Though many of the elite private institutions increased security measures by hiring guards, the public establishments simply lack the funds to do so, and therefore took matters into their own hands. Many educators have expressed their criticisms of such practices, including head teacher and president of the Khyber Pakhtunkhwa province teachers’ union, Malik Khalid Khan. Khan noted his disapproval, stating ”Our job is teaching, not carrying a gun…We are not prepared to become security guards.” Meanwhile, Mohammed Iqbal, a physical fitness instructor who now doubles as a security guard at Government Higher Secondary School Number 1, refuted this notion, saying ”We want to deliver knowledge, not weaponise our young people. But circumstances have compelled us to do this for our own safety.” 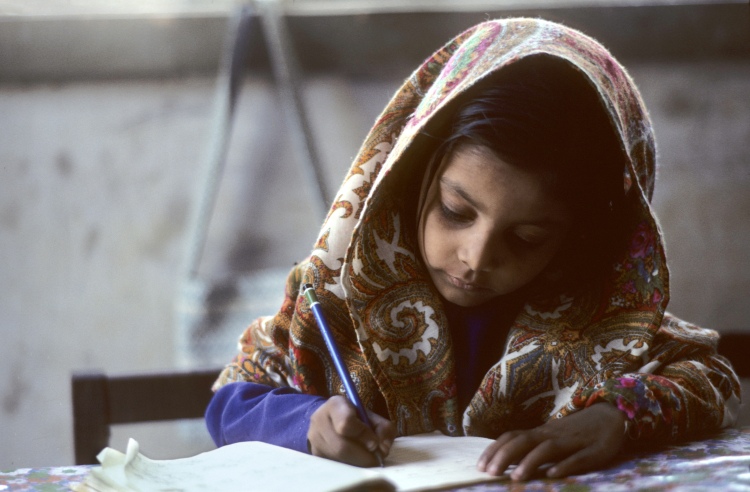 A young student doing her schoolwork in Karachi, Pakistan, by John Isaac for the UN

The report also points to the lack of governmental transparency and consistency in the data resulting from these attacks as a reason for their continued occurrence. Noting how this can lead to concerns regarding the government’s ability to ensure repairs of damaged institutions, identify patterns in attacks which could aid in more effective protective efforts, and investigate responsible parties, Human Rights Watch reveals just how vital this data keeping can be. Though outside sources like Global Terrorism Database, the Global Coalition to Protect Education from Attack, and the Ministry for States and Frontier Regions may maintain records of the attacks, the lack of government-collected data reports leads to doubts of any sort of recovery or preventative effort for the future.

One of the primary intentions of Human Rights Watch’s latest report is to promote government intervention in making schools safer for students and teachers. Among the suggested changes is the implementation of the Safe Schools Declaration. Endorsing this declaration, which is a non-binding political agreement, would mean that the Pakistani government pledges to continue facilitating access to education after an attack occurs. Furthermore, adhering to the declaration ensures that more measures are taken to prevent these attacks before they occur – through methods such as more thorough investigations and prosecutions of crimes involving schools and the minimization of cross over between schools and Pakistan’s military efforts – so that schools are less likely to be targeted by outside militant groups. According to Bede Sheppard, who serves as the child rights deputy director for Human Rights Watch, “The Pakistani government should do all it can to deter future attacks on education, beginning with improving school security and providing the public reliable information on threats. Attacks on education not only harm the students and families directly affected, but also have an incalculable long-term effect on Pakistani society.”

Denying an education, especially by way of violence, is an incorrigible act, one which sets back and damages entire communities socially, economically, and developmentally. As the new Human Rights Watch report details, denying an education is denying or hindering the future of both the current generation of students, as well as the generations to come. When these attacks do occur, it is imperative that victims are provided with an alternative means by which they may continue their education whilst repairs are made. Furthermore, psychosocial support should be provided for cases in which it is warranted. Fulfilling these basic human needs for students, families, and teachers in Pakistan will only be accomplished once the government is held accountable.

Supporting the work of Human Rights Watch through donation is one way to ensure these efforts are made. Click here to donate, or to find out more about the organization and its aims to fight human rights abuses around the world.