The Australian government maintains a strict rule that asylum seekers travelling by boat will be detained and subject to ‘offshore processing’ outside of the country. The ongoing Syrian Civil War and conflict within the Middle East have flooded European countries with refugees fleeing war-torn countries, and migrant target destinations are expanding across the Pacific. Thousands of refugees attempting to enter Australia, regardless of age, gender, race and ability, have been detained by the government and are being held in ‘processing centres’ where they are at this moment subject to shocking human rights abuses.

‘The Pacific Solution’ is the name of a policy introduced by the Australian government in 2001 to essentially prevent refugees from reaching the mainland. The policy has three core stratagems: firstly, it removed various external territories (for example, surrounding islands such as Christmas Island) from the Australian migration zone to limit the ability of migrants to apply for visas to enter Australia once they had landed in these technically Australian territories. Secondly, it launched an operation to intercept boats carrying migrants once they had entered Australian waters, and turn the vessels around. Lastly, it created the process of sending these migrants to detention centres on Manus Island (Papua New Guinea) and Nauru, for offshore processing to determine their refugee status. 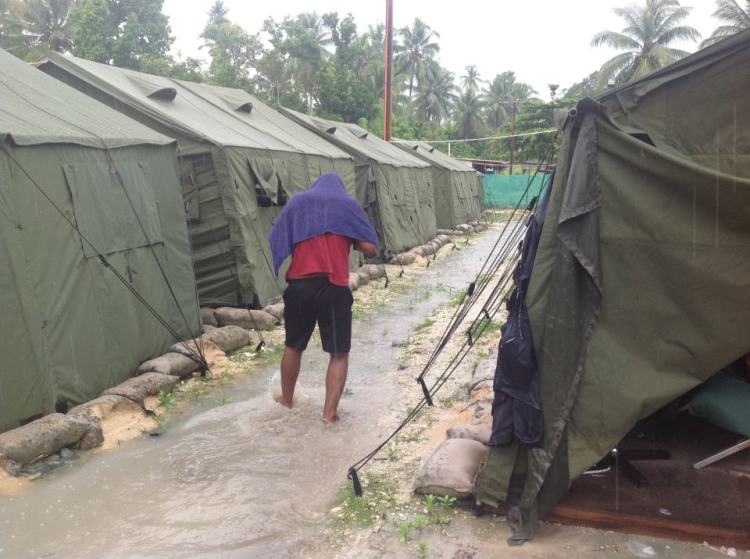 Amnesty International labels the detention centres in Nauru and Papua New Guinea “open air prisons.” Detained refugees on these islands are living in appalling conditions, subject to prison-style searches and various abuses by guards. Human Rights Watch’s investigation into conditions on the islands exposed the “appalling abuse and neglect” of refugees, including delays and denial of urgent medical care, neglect by Australian government workers and unpunished assaults by local islanders. The detention centres themselves amount to little more than crowded tent colonies which, vulnerable to the elements and tropical climate, foster unlivable conditions.

The scale of the human rights abuses in offshore processing centres on Nauru and Manus Island was brought to light in recent news by the Guardian’s harrowing exposé “the Nauru files.” The files detailed the consequences of the Australian government’s inhumane treatment of refugees on these islands – suicide rates, self-harm and mental health issues have skyrocketed whilst allegations of sexual and physical abuse against migrants are emerging. The suffering at these centres is immense, and the Australian government continues to feign ignorance. Protesters against the camps, along with organisations such as Amnesty International and Human Rights Watch, believe that the Australian government is championing a policy of deterrence, whereby refugees unable to withstand such cruel conditions any longer will give up their hopes of ever entering Australia.

Furthermore, a tragic repercussion of the offshore processing of refugees in these third-world island nations has come to light. The consequences of detention for LGBTI migrants violate basic human rights conventions, and place them in dangerously hostile conditions. Homosexuality is illegal in Papua New Guinea, the location of Manus Island’s crowded offshore processing centre. Gay, lesbian, and transexual refugeees on Manus Island have fallen victim to rape and physical assault from both their fellow detainees and local islanders, and government officials are failing to respond adequately to protect them. The Guardian Australia obtained an orientation presentation shown to migrants arriving at the Manus Island detention center which reads, “Homosexuality is illegal in Papua New Guinea…people have been imprisoned or killed for performing homosexual acts.” Gay and lesbian refugees, many of whom are fleeing persecution in their home countries, face a harrowing decision – revert to the repression of hiding their sexuality, or risk potentially fatal punishment for their sexuality.

So, a Pacific Solution or a xenophobic punishment scheme? The uproar against Australia’s blatantly discriminatory migration policy has increased in recent years, but its government continues to attempt to seal its borders to asylum seekers to this day. Within the past month, the government has announced a bill proposal for a lifetime ban on any migrants attempting to reach the country by sea. Refugees fleeing desperate situations lack the means to travel to Australia by other methods, often forced to attempt the perilous sea journey in smugglers’ boats. This new legislation would cripple the ability of the majority of refugees attempting to enter Australia from settling there. The government has defended their proposition, claiming that it does not violate constitutional law and would enable third-country resettlement. Immigration Minister Peter Dutton has stated that “we are keen to get people off to third countries if they can’t return to their country of origin,” in a statement clearly demonstrating an unabashed rejection of humanitarianism and aid for refugees. Meanwhile, the offshore processing of migrants on Manus Island and Nauru continues, as a great human rights tragedy criminally disguised by the Australian government.