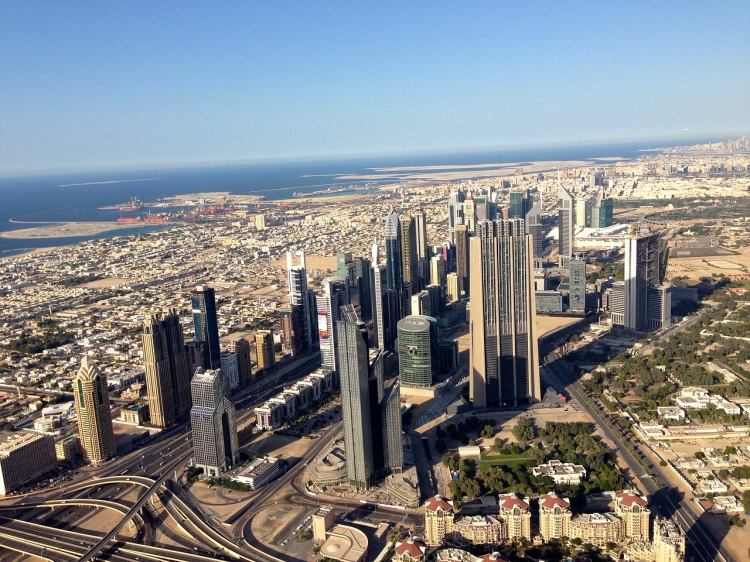 At first glance, the large structures stand out reaching up into the sky. Burj Khalifa, the world’s tallest building, stands among them as one of United Arab Emirates’ greatest creations. Enormous malls, beaches, hotels and other aspects of the luxurious life one can live in Dubai or Abu Dhabi are what most see when they stay there for a short period of time. Having lived in the city for three years, I have realized that there are many facets of life that may not meet the eyes of a tourist. Boasting a glossy exterior and high-rise buildings, Dubai is a bustling city constantly under construction. It seems their four-lane roads that stretch into the desert are accommodating for a population of the future, with construction plans to match.

Consequently the ever-changing web of roads, overpasses and tunnels cause a daily standstill in many parts of the city. One look out the window of a car in a traffic jam, and the first thing that meets the eye is a group of men in blue overalls standing outside, working in the blazing heat. Dubai is a city filled with migrant workers; some are lucky enough to be able to bring their families there, whilst others are not. “Many of the city’s migrant workers put up with long working days, relative isolation and inhospitable weather so they can send money back home; sometimes to children awaiting school fees or daughters awaiting dowries.” (CNN). They live in camps outside the areas where even residents would regularly travel, seemingly stowed away from public sight.

Dubai hosts a highly multicultural society; less than 20% of the population are citizens of the United Arab Emirates (UAE). It has one of the highest net migration rates in the world, people from all nations come to work and live in the UAE and its cities. According to the CIA World Factbook, expatriates account for 85% of the labour force. South-Asians make up roughly 50% of the population, and whilst they work in all industries, the majority work in the construction industry, being bussed to and from their camps to work in the heat day after day with minimal pay. In a Human Rights Watch (HRW) report from May 2009 entitled, The Island of Happiness: Exploitation of Migrant Workers on Saadiyat Island, Abu Dhabi, HRW highlighted a number of issues that are prevalent within the construction industry fuelled by migrant workers in the UAE. Key factors include obscure employment information prior to the worker’s arrival, with inferior terms offered than what was promised. Removal of passports, indebtedness due to recruitment fees, and the sponsorship system are also issues that were flagged in the report and its follow-up in 2011.

Workers are brought into the country through immigration sponsors, which give employers large amounts of power over their new workers. This policy, called the kafala (visa sponsorship) system, ties workers’ visas to their employer, thereby restricting the migrant worker’s ability to change employers. Obscure employment information is a widespread issue, as authorities, contractors and developers have not ensured that the information the workers receive pre-departure is correct. Often, the migrant workers had not signed in their home countries or had signed but arrived facing contracts with significantly different terms. Arriving in the UAE then becomes a challenge, as they either have to forego the investment of going there or work for a lower wage than agreed upon.

Throughout the UAE, striking is illegal, and any company, or foreign contractor is obliged to report a possibly formation of workers’ committee to the authorities (South & Bland, 2014. Striking workers are often beaten, and face imprisonment and possibly deportation, as was the case on Saadiyat Island. But if the workers wanted to leave at any point, would they be able to? No, the removal of passports is a common practice in low-wage industries, and this is no exception. They do so by either confiscating them to “protect their investments” or claiming they will keep the documents safe. The truth is that this policy keeps the workers dependent on their employer. The International Labour Organization (ILO) has highlighted confiscation of passports as one key element in identifying forced labour situations.

Several other aspects bring the labour situation closer and closer to forced labour. Recruitment fees are to be paid to the employer for bringing them to the UAE. This cost far outweighs the wage, especially after sending most earnings to their families in their home countries. Most reported to HRW that they paid between US$900 and $3,350 to agents in their home countries when seeking employment in the UAE. This limits their freedom by leaving them in debt to the agencies that help them migrate, a debt that often takes more than three years to pay off, according to the same report. The problem is that in spending all possible resources to obtain a job in a foreign country, little is left for the family and those around them. Pooling all resources into these fees, false contracts and jobs with hazardous conditions may seem like a futile effort to make a living, and it is highly contestable as to whether it really is better than their situation back home after all. When both living and working conditions are under scrutiny, bad news often comes into sight. The well-known construction scandals of the upcoming Qatar World Cup in 2022 do not stand as isolated incidents in the region, construction workers in several of the Gulf States live under measly conditions and without the freedom to leave if they so desired.

The list of optimistic construction plans never seem to end, with several projects have been discussed in recent years. Examples include Dubailand, the City of Arabia complex as well as the new plans to build a Mall of the World at a size of approximately two hundred football pitches in ten years (Gulf News). This in addition to hosting the 2020 World Expo in Dubai makes it clear that the city will need vast amounts of labor to reach its ambitious projects in the future. Clearly there are a number of issues that need to be addressed related to the treatment of migrant workers in the construction industry. Whilst many suggestions have been made, it is important that all companies and that the government protect worker’s right, no matter which socio-economic background they come from. They deserve the chance to make an honest living, without having to work under what highly resembles forced contract.