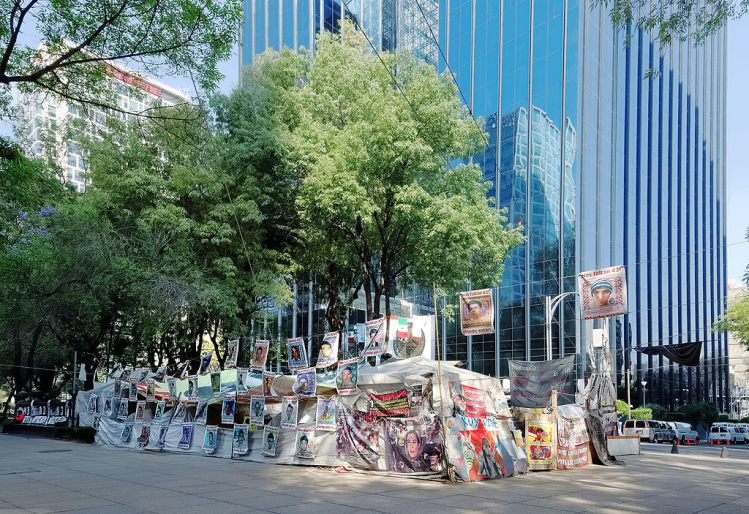 On September 26th 2019, people from all over Mexico took to the streets of Mexico City, marching to commemorate the loved ones they had lost five years earlier. In 2014, in the southern state of Guerrero, 43 students went missing from the Ayotzinapa Rural Teachers’ College. Their whereabouts are still unknown. Families and loved ones continue to mourn and remember those who were lost. The few that survived the 2014 incident claimed the students were ambushed by local police forces before being handed over to Guerreros Unidos, a criminal group known for extortion, kidnapping, and drug trafficking.

The investigation led by Enrique Peña Nieto, President of Mexico at the time, has been condemned by not only the families of those lost but also by the general public for the disappearances and their negligence in carrying out due process. Alejandro Encinas, Deputy of Interior Security, claims the investigation was inadequate due to the use of torture and the forging of evidence by officials. Because the case was mishandled, the possibility of successfully prosecuting those suspected of involvement in the crime was reduced. According to Encinas, “the poorly named ‘historic truth’ was built with a foundation of cover-up, fabrication of evidence and torture to the benefit of the perpetrators and against victims’ rights. The historic truth collides with reality.”

In September, following the release of Gildardo López Astudillo, the purported leader of the Guerreros Unidos, President Adrés Manuel López Obrador announced the continuation of an investigation into the disappearances as well as the discrepancies in the investigation under Nieto’s government. Astudillo was the 54th suspect behind the disappearances to be released during the investigation. His release represents the corruption in the judicial system as well as the lack of justice given to the victims and their families. “It’s a very serious justice issue and because of that we’re going to formally file a complaint with the Attorney General’s Office and the Judiciary in this case” promised Obrador.

However, a thorough investigation of the missing 43 students will not fix the greater, larger crisis in Mexico today. 37,000 people are currently missing throughout the country. In addition to this, 26,000 unidentified corpses have been found. The failure of authorities to investigate the missing and identify the bodies of those found has left people across Mexico enraged and heartbroken by the lack of justice for their loved ones. Thousands in search of those who have disappeared have joined forces across Mexico, forming 70 collectives under the umbrella group Movement for Our Disappeared in Mexico. This movement differs from past ones as it is motivated by love, anger, and justice. These families, with their relentless search for their missing loved ones, could be the force that changes Mexico’s broken justice system. This is evident in the 2017 implementation of the General Law on Disappearances, a law that seeks to strengthen the quality of the investigation. It calls for the creation of national databases for authorities to share information about missing persons and discovered bodies as well as assigning certain government bodies responsibility for investigation. It defines “enforced disappearance” in line with human rights law, and allows families to participate in investigations as well as implementing an advisory council at federal and state levels to check and validate the work of search commissions.

Obrador continues to make efforts towards reform in regards to the 43 disappeared. He introduced the Commission for Truth and Justice and created the new National Prosecutor’s Office, which carry out thorough and sincere investigations into human rights. It is also more promising as it is separate from the executive branch and is therefore less influenced by politics.

The loss and lack of justice for these families calls into question the corruption and violence that has become the norm in Mexico. For these individuals to really change the system they must continue the fight for their loved ones and continue urging Obrador to continue the investigations until their friends and families are found and put to rest. The persistence of those searching for their loved ones is what could be the force behind true reform to Mexico’s fractured system of corruption. It may also take international recognition in addition to internal calls for reform to catalyse the deep structural change that is necessary to serve justice to all those lost.