Nothing possesses quite the same ability to simultaneously polarise and unite as the momentous sporting event that is the FIFA World Cup. It is that time again, when football addicts rejoice at spending an unhealthy amount of time shouting at an inanimate screen, while those indifferent suddenly decide that they are fascinated by tennis. Obsessive followers learn several languages just to be able to give their unheard support to a struggling underdog, and shed tears of joy and sorrow as penalties taken by players they have never heard of fly in all directions. Meanwhile, long-suffering partners, spouses and siblings make themselves scarce or else torment their engrossed loved ones with inopportune questions such as, ‘So what exactly is the offside rule?’ during extremely intense VAR investigations. 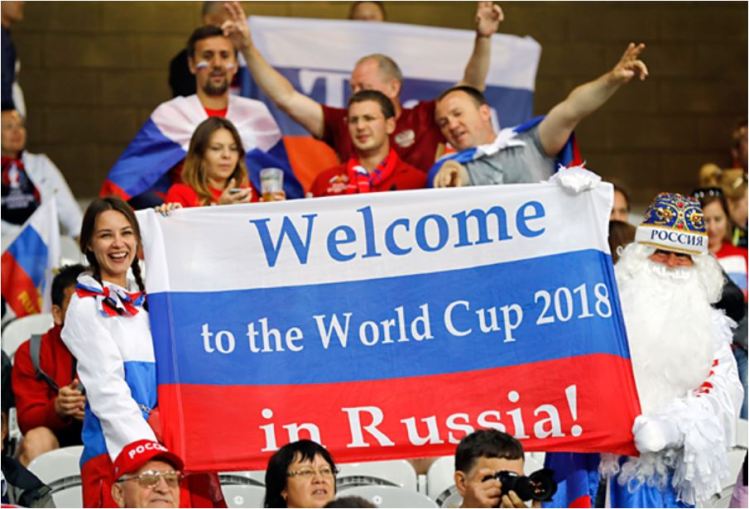 Russian fans at the FIFA World Cup, 2018. Source: Russia Beyond.

Yet, while there is little harm in enjoying the sporting spectacle of the World Cup, it is also vital to delve beneath the surface of the glory and glamour of the coverage to consider the socio-political context not just of this World Cup, but also of the broader host allocation process, and whether anything can be done to make the game more beautiful on both the inside and out.

The UK’s television coverage of the event has been polished until it shines; indeed, both the BBC and ITV studios are extremely conveniently situated in front of Moscow’s St Basil’s Cathedral, undoubtedly one of the most iconic pieces of Russian architecture in the capital, if not the country. Furthermore, it is no coincidence that the seemingly incessant ITV ad breaks are punctuated by Swan Lake-themed music and animations in a celebration of Russia’s rich cultural heritage. From the perspective of the sofa, it would make one eager to hop on a plane out there, were it not for work, school, dissertation research, and the many, far more serious, social, economic and geo-political barriers barring the way.

Beneath this immaculate surface, the issues are voluminous, both within and outside Russia, and in sporting and non-sporting contexts. Human Rights Watch have described this as being the worst period for human rights in Russia since the Soviet Era and, while this may seem alarmist, there are activities taking place in the country which certainly do not belong in the 21st century. Alongside widespread negligence of basic human rights, including freedom of expression and freedom of assembly, minority groups such as the LGBTQ community continue to be subjected to horrific discrimination and abuse. Chechnya, which formed the base of the Egyptian team during the qualifying rounds, is notorious for the abduction, torture and murder of gay men. While the fervent media attention which inevitably accompanies the World Cup could serve as an opportunity to draw attention to these extremely pressing issues, many of the cameras turn a blind eye, and protesters trying to raise the profile of such abuses are silenced by means of force and fear.

One noteworthy aspect of the tournament, often remarked upon by commentators but little explored, is the extent to which fans from regions much farther afield dramatically outnumber those from European nations. This is perhaps an indication that political distance has had a greater bearing upon the turnout than geographical proximity. Twice as many 2018 World Cup tickets were sold in Columbia as in England, and it is hardly surprising. Violent clashes between England and Russia supporters during the Euro 2016 championships marked just one of several incidents which have seen far-right groups establishing for the host nation a reputation for hooliganism. This has been among several reasons why, despite the new ID system placing controls on the Russian fans allowed to attend the matches, many European fans have preferred to enjoy the football fever from within their own countries.

One of the clearest illustrations of the disparity between appearance and reality has been the travel advice given to those who have followed their hearts to Russia. Face paint-covered fans voicing renditions of ‘England’s Going All the Way’ may be the envy of their friends back at home when they get to witness England winning their first ever World Cup penalty shoot-out, but the Football Supporters’ Federation travel advice tells a darker story. In the interests of their safety, LGBTQ fans, for instance, have been advised to conceal their sexuality by refraining from displaying affection in public places. While England’s no. 3 Danny Rose has been kicking up a storm on the pitch, he initially advised his family not to travel to Russia as a result of fears related to racism. Indeed, politicians and members of the British royal family have staged a boycott of the tournament, following on from escalating tensions with Russia since the poisoning of ex-spy Sergei Skripal and his daughter Yulia in Salisbury in March.

When a country that pays so little attention to human rights has been allowed to host a global sporting event of such high prominence and enjoy all the (largely whitewashed) publicity that comes with it, questions have to be asked about the manner in which the FIFA selection process is being carried out. The banning of Sepp Blatter and Michel Platini in 2015 seemed, theoretically, like the start of a new chapter for the Football Association. Yet, as fans are constantly reminded by incessant pitch-side advertising for Qatar Airways, 2022 will see this momentous sporting event jetting off to a host nation where flogging and stoning remain legal forms of punishment. FIFA may show mastery in rhetoric, but when the new rules for the 2026 selection process require a host nation ‘respecting international human rights and labour standards according to the United Nations’ Guiding Principles’, it is difficult to take their words to heart. The irony that the President of the 2026 World Cup host nation has been responsible for entirely disregarding the human rights of Syrian refugees forced from their homes by the diplomatic tactics of this year’s host nation is a blatant illustration of the web of corruption at the heart of the process.

The World Cup unfailingly has unique and invaluable contributions to make to our society. It can bring unity between fans of different nations through a shared love of the beautiful game, and within societies fragmented by internal political disputes. When over 24 million tuned in to watch England fight for their place in the quarter finals, it no longer mattered where people were from, how long they had been in the UK for, or whether they voted Leave or Remain; across the country, strangers embraced like long-lost friends and sang with one voice in the midst of the euphoria. However, whilst caught up in the unexpected rise and fall of teams from across the world, we must not be carried away in the moment, only to let it pass us by.

While all cameras point east, it would be all too easy for the viewer to take comfort that things in Russia do not appear as grisly as predicted. However, the media have a responsibility to not turn our attention away once the players pack up their boots and head home because, alongside disruptive violence, a huge number of voices speaking out for increased justice and equality in Russia are also being suppressed behind the lenses and off the field. By mid-July, the brightly coloured shirts, the flags and the raucous cheering will be gone. But Russia’s human rights abuses will continue unless the same scrutiny under which the country has been held during the build-up to and the duration of the tournament is maintained.