Venezuela has struggled with civil unrest in recent years, stemming from frustrations with government mismanagement. Citizens are bearing the brunt of the difficult economic and political situation. Venezuelans are struggling to pay for, and in some cases, even access, basic food and supplies. Inflation on the price of food has skyrocketed, increasing 552% from November 2015 to November 2016. This is not just a problem of past years. Prices continue to rise on a month to month basis, with a 51% increase in prices in the food sector for August. President Nicolas Maduro declared a state of emergency in January 2017. However, despite requests for international assistance from Venezuela’s National Assembly, the opposition-led legislative body, the government has refused international aid and conditions have not improved for the majority of citizens. Though many factors have contributed to the creation of such a disheartening and precarious situation, the government’s management of and reliance on the nation’s oil reserves plays a considerable role. 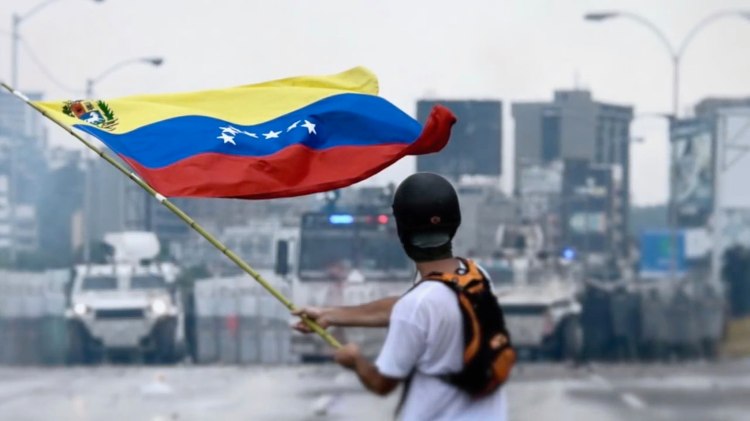 Venezuela is renowned as a leader in world oil reserves, ranked first by the Organization of Petroleum Exporting Countries (OPEC) in 2016. Oil exportation comprises the backbone of the economy. It accounts for 25% of the nation’s GDP and 95% of exports; it is no small piece in Venezuela’s financial puzzle. In the 2000s, when oil prices were high, the Venezuelan government used the revenue from oil exportation to subsidize food and supplies for all citizens, a way for the socialist government to demonstrate that it was successfully providing for all. Venezuela imports nearly all consumer goods, aided by oil exportation, and as a result has very little history of domestic production. There is little incentive to produce goods within Venezuela, due to the government’s subsidies and strict regulations. The government did not take the opportunity to save funds while the price of oil was high, and when prices crashed in 2014, Maduro’s government found themselves caught between a rock and a hard place. The nation’s GDP dropped 10-15% and inflation soared. Venezuela owed billions to external creditors and was in danger of defaulting, which led to the current situation of national financial uncertainty. To decrease subsidies on food and supplies and increase taxes to repay debts would have lost the new president favor amongst his constituency, and beyond that, appeared contrary to the socialist sense of equanimity and provision for all citizens. Instead of allowing the bolivar, the national currency, to drop in value, the government overvalued the exchange rate and printed more, which drove up inflation. Imported goods, like food and supplies, which Venezuelans relied on due to the lack of domestic production, increased in price and stopped flowing at the same volume. Unfortunately, this aided the growth of an unintended market. Black market trade in Venezuela blossomed. There, food and basic supplies are sold at far above the fixed subsidized prices. Venezuelans often have no other option than to purchase these more expensive goods as there is no other source available.

Inflation is part of the problem. In July, the minimum wage was increased by government order for the third time thus far in 2017. This was an attempt to increase purchasing power, but has done little to control inflation, which is predicted to rise by 700-800% in the coming year. The bolivar is currently worth about 10 US cents, although US dollars are sold for much more on the black market. Food is less affordable than oil. A liter of gas cost 6 bolivars in 2016, which was 100 times cheaper than a liter of water at the time. Additionally, it has become common for Venezuelans to stand in line for hours in front of grocery stores to buy goods at the subsidized prices. Even then, each person is only allowed to purchase a certain amount of essentials, like rice and diapers. There are not enough of these essential products available at an affordable price to meet demand. The price of groceries has increased beyond five times the minimum wage and shows no signs of slowing. There is still little incentive or ability within Venezuela to produce food products, despite available and fertile land, which means there is currently no emerging domestic market to fill the void left by the decrease in imports and soaring prices.

Sign in Spanish in a Central Medeirense (supermarket) informing customers that they are only permitted to purchase three chickens. Source: Flickr.

Public protests regarding the struggle for food and survival have fallen on the deaf ears of Maduro’s government. The president remains in power, spurns actions of the National Assembly, and does not permit outside help for the nation. Nongovernmental organizations could very well help those suffering most from food shortages but have been restricted in their ability to work. The shortages of food have lead to a jump in weight loss and ill health, with an estimated 25% of children currently malnourished and the population collectively losing an average of 9 kilograms in weight. Human Rights Watch has published a series of recommendations, among them a request for international pressure on the government to readdress its treatment of the food crisis, and a call for the Venezuelan government to explore further aid from international organizations to connect suffering people with programs for food and supplies. It has yet to be seen that Maduro’s government will heed the offered advice. If the government does not ease its stranglehold, it will further trap itself in poor policies that worsen a poor situation for those most vulnerable. Protests and demonstrations have been ongoing since spring 2017; the people of Venezuela are clearly willing to express their discontent and demand change. There is hope that improvement will come before further escalation, but no clear sign of how such improvement will arise.