Ala kachuu, meaning ‘‘grab and run” in Kyrgyz, refers to the often-violent kidnapping of young women, who are then coerced into marriage by their captor. Bride kidnapping is an extremely stressful and traumatising experience that denies a woman her rights and violates numerous international declarations of human rights. These women often experience physical, emotional, and sexual violence, accompanied by social stigma that prevents them from fighting back or escaping. If the woman tries to escape, she risks dishonouring Kyrgyz tradition and alienating herself from her family and village. The practice strips consent and agency from abducted women, solidifying the bride’s victimhood. 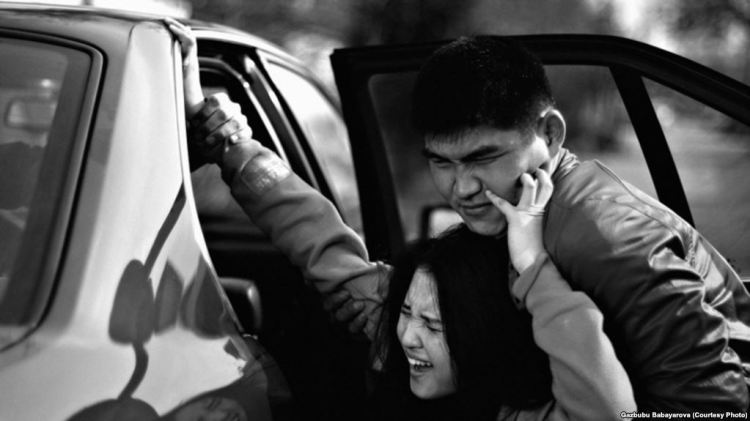 Illustrative photo from the Kyz Korgon Institute, an Kyrgyz NGO that campaigns to eliminate the practice. Source: RadioFreeEurope

The typical scenario in Kyrgyzstan involves a young man, accompanied by several friends (and usually a bottle of vodka), who attacks a preselected young woman on the street, forcing her into a car and taking her back to his home. The man’s family then pressures the woman to consent to the marriage, with female members playing a large role in psychologically and physically forcing the woman to don the traditional “marriage scarf,” which evidences the agreement to marriage. With the bride’s reluctant assent in place, the kidnapped woman informs her parents of the arrangement and the ceremony cements her newly-wed status. In her article “Hunting for Women: Bride-kidnapping in Kyrgyzstan,” Lori Handrahan states that “bride-kidnapping appears to be a method for Kyrgyz men to mark their ethnic coming of age.” Ala kachuu is simultaneously a reification of a cultural Kyrgyz identity and the idea of “manhood” – at the expense of a woman’s freedom.

Approximately one third of ethnic Kyrgyz brides have been forced into a traumatic, non-consensual marriage. The Women’s Support Centre (WSC) in Bishkek reports at least 11,800 cases of bride abduction per year, with 2,000 cases involving rape. The Kyz Korgon Institute, an NGO that works to eliminate the practice, estimates that between 68 and 75% of marriages in Kyrgyzstan result from illegal bride kidnapping.

The practice of ala kachuu breaks numerous human rights laws, both domestic and international. Article 16 of the Universal Declaration of Human Rights (UDHR) explicitly states that “marriage shall be entered into only with the free and full consent of the intending spouses.” Kyrgyzstan is also party to the Convention on the Elimination of All Forms of Discrimination against Women (CEDAW), which the country ratified in 1997. Article 16 of the CEDAW asserts that all parties “shall take all appropriate measures to eliminate discrimination against women in all matters relating to marriage and family relations and in particular shall ensure, on a basis of equality of men and women: (a) The same right to enter into marriage, and (b) The same right freely to choose a spouse to enter into marriage only with their free and full consent.” Even domestic laws explicitly outlaw ala kachuu. Article 155 of the Kyrgyz Republic Criminal Code prohibits “forcing a woman to marry or to continue a marriage or kidnapping her in order to marry without her consent.”

According to the laws listed above, among others, ala kachuu should be prosecuted as a gross violation of basic human rights. However, despite the overwhelming legal condemnation, very few incidents are ever reported, let alone prosecuted. Kyrgyzstan’s President Almazbek Atambayev banned bride kidnapping in 2013, with a punishment of up to 10 years in prison. However, since 2008, only one perpetrator of the crime has been convicted.

According to the 2015 UN Convention of the Elimination of All Forms of Discrimination against Women, Kyrgyzstan has failed to undertake sustained measures to eliminate the harmful practice of bride kidnapping. The CEDAW Committee stated that they were “deeply concerned that bride kidnapping appears to be socially legitimized and surrounded by a culture of silence and impunity, and that cases of bride kidnapping remain underreported, as they are considered a private issue that should remain within the family.” The Kyrgyz social practices of secretive bride-kidnapping seem to be stronger than the legal code forbidding it. Bride kidnapping has been framed as central to Kyrgyz identity. In certain rural areas, bride kidnapping is seen as a ‘rich tradition’ and accepted as the norm. Social acceptance makes it difficult to acquire information about potential victims, with many family members protecting the kidnapper. A human rights perspective, however, dictates that the practice should be understood as a complex social institution, rather that a rich tradition — especially since bride kidnapping was uncommon prior to the twentieth century. Thus, it defies the usual classification of a so-called ‘traditional’ practice.

Civil society groups, like the Women Support Centre, seek to rectify the systemic violation of human rights in Kyrgyzstan. However, despite successes from lobbying and advocacy work that played a large role in pushing for the 2013 amendment to extend the punishment for bride kidnapping to 10 years, the groups still have a long fight ahead. Ala kachuu continues to be seen as a rite of passage for Kyrgyz men, and older women in the captor’s family continue to force the woman to don the marriage scarf.

While the Kyrgyzstan government fails to prosecute many cases of ala kachuu, cultural attitudes also contribute to the continuing violations of human rights. According to Chingiz Batyrbekov, professor of human rights at the American University of Central Asia, if the government wants to address this issue, the highest levels of authority need to engage in a sustained effort to increase public education and awareness of domestic and sexual violence. Batyrbekov thinks the government should be doing more, stating that “laws were adopted, but they don’t work… The government doesn’t see it as an issue. Only women MPs are addressing the problem.” Until the government decides to take a more active role in combatting the internationally-condemned practice of ala kachuu, human rights laws will continue to be violated.