The Brazilian congress has recently voted to proceed with the impeachment of President Dilma Rousseff, on the grounds that she used money from state banks to cover budget gaps (notably, she is not faced with accusations of illicit personal enrichment.) Corruption has had a long history with Brazil. It is ingrained in the culture of companies and the government, and removing its influence going to be a long and painful process. Yet, beyond an economic or political problem, corruption is a humanitarian issue. It undermines democracy and the rule of law, and erodes public trust in the government. As the Petrobras scandal unfolds, it is clear that the Brazilian people are tired of the rampant corruption that afflicts every level of politics.

Anti-government protests in Brazil in March 2016, by Agência Brasil Fotografias

Brazil is a big country; the 5th largest in the world, with the 7th largest economy, and it is the world’s 9th largest producer of petroleum. That petroleum is produced solely by Petrobras; Brazil’s largest company, and one of the world’s largest companies. It is entirely controlled by the government, who is also its largest stakeholder, and it accounts for roughly 10% of Brazil’s GDP. For comparison, Apple, America’s largest company, is responsible for 0.5% of the US’s GDP. Clearly, this kind of government control provides ample opportunity for corruption and graft. In an ironic twist, Petrobras was actually voted as the world’s most sustainable oil company of 2008. Among other things, this position is a measure of a company’s social responsibility, ethics, and transparency. Clearly, recent events paint a very different picture.

From 1964 to 1985, Brazil was ruled by a military dictatorship. Though corruption was rampant under the leadership of the military, Brazil experienced years of remarkable economic growth, dubbed the ‘economic miracle.’ In 1985, following a period of economic turmoil, the military peacefully transferred power back to civilian hands. However, it is important to remember that the current Brazilian government is only 30 years old. It is still a young democracy, and one that faces difficult challenges Years of military rule continue to haunt the nation, and the legacy of that rule continues to shape and influence contemporary Brazilian politics. One thing that the civilian government inherited was a culture of bribery and corruption that continues to plague both companies and the government.

Yet, the story is not so black and white. Many of the politicians calling for Ms. Rousseff’s impeachment are, themselves, being investigated. Vice President Michel Temer, who is expected to take over if Ms. Rousseff is forced to step aside, has been accused of being involved with a kickback scheme at Petrobras, receiving payments from a construction company for contract favors, and being party to an illegal ethanol purchasing scheme. Renan Calheiros, the Senate leader, also faces a catalogue of accusations, including receiving bribes from Petrobras, tax evasion, and allowing a lobbyist to pay child support to Calheiros’ daughter from an extramarital affair. The speaker of the lower house, Eduardo Cunha, is on trial at the country’s highest court, the Supreme Federal Tribunal, on charges that he accepted $5 million in bribes from Petrobras. These politicians represent only a fraction of those who stand accused of bribery and corruption. Altogether, about 60% of the 594 members of Brazil’s congress face serious charges, ranging from bribery and electoral fraud to kidnapping and homicide. While no one can claim that Ms. Rousseff is popular in the country – she has single digit approval ratings, and the economy is in the midst of a deep recession – there are accusations that the impeachment is less about justice and stamping out corruption than an effort by shady politicians to shift attention and power. The words ‘conspiracy’ and ‘coup’ have been used by the Rousseff administration to describe the impeachment proceedings. 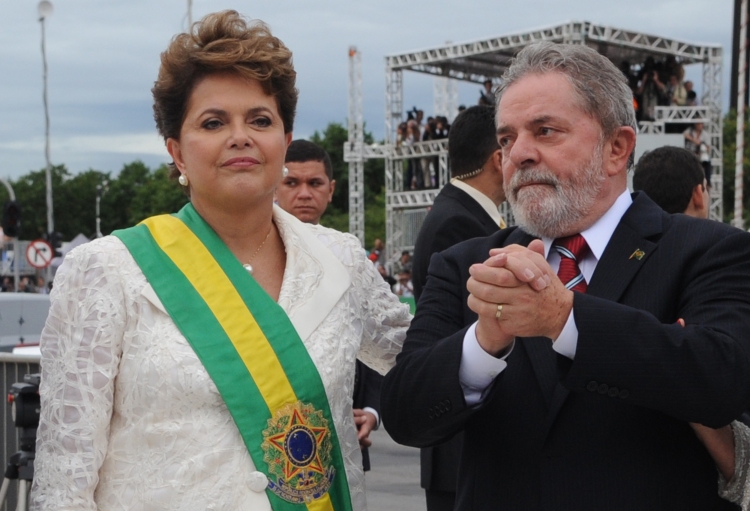 Another key player in the drama unfolding is Luiz Inácio Lula da Silva, known simply as Lula. Lula served as the president from 2003 to 2008, during which time Brazil experienced a period of profound economic and social development. One of his most notable achievements is the Bolsa Fámilia program, which essentially paid low-income families to send their children to school and have regular health checks. This program is credited with lifting millions out of poverty. Lula left office with an unprecedented 83% approval rating, making him not only the most popular president Brazil has seen since the end of the military dictatorship, but one of the most popular leaders in the world. Yet, for all his successes, Lula’s presidency was not without incident. In 2005, it was revealed that members of congress were being paid $12,000 a month to vote for legislation favored by the ruling party. However, Lula was never directly implicated, though several high-ranking members of his government resigned, and he went on to win the next year’s presidential election. In Brazil, it is so common for massive scandals to simply fizzle out without any real consequences or changes that they have a phrase for it, acabou em pizza, literally “it ended up in pizza.”

However, the recent scandal and investigations have threatened even Lula. It was reported that charges involving money laundering and bribery were being levelled against him. His home was even raided, and Lula himself was taken to the police station for questioning as part of a larger corruption investigation. Yet, in a stunning turn of events, it was announced that Ms. Rousseff would appoint him to her cabinet, a position that would give him immunity to all but the highest federal court. This prompted both public and judicial outrage. Now, the judiciary is in turmoil, as judges from both sides try to protect or condemn Rousseff and Lula.

It is impossible to say how this story will end. It is clear that some of the most prominent politicians will not survive the scandal, making it that much more difficult for Brazil to lead its way out of this problem. In the short term, this will create yet more turmoil and instability, but in the long term, it can help to limit the prevalence of corruption, and help to regulate Brazil’s culture of corporate and government corruption. Whether Rousseff retains power and who will be elected to the house once the government has stabilized will say a lot about the future of the country, and its dedication to fixing its corruption-riddled government.