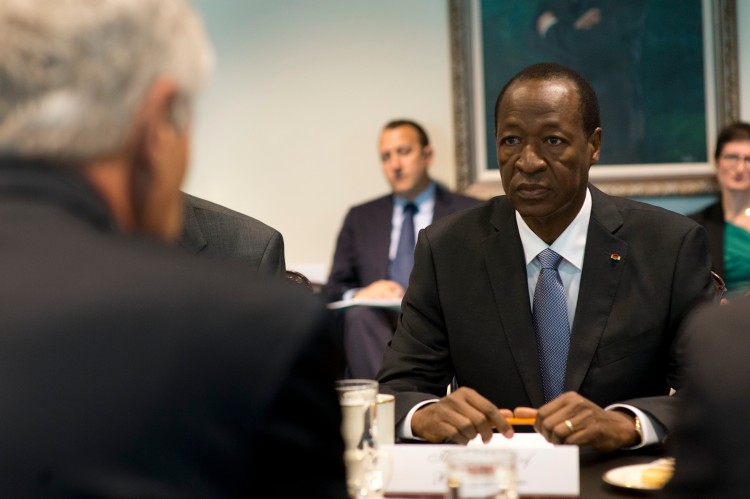 Burkina Faso, a landlocked country in Western Africa, is currently going through a massive governmental upheaval. Widespread civilian protests over President Blaise Compaore’s bid to change the constitution to allow himself to run in the next election cycle after 27 years in power, led to his resignation on October 31st. Since then, however, the military has taken charge, appointing Lieutenant Colonel Isaac Zida as the country’s transitional leader. This move has been met with more protests by the people, as Burkina Faso’s constitution states that the head of the National Assembly should take office if the president resigns and should organize elections within 90 days. The army has prevented this, dissolving the legislature and suspending the constitution.

It is often difficult for those who live in a place with representative governments and regular elections to understand coup d’états, presidential overthrows, and military rule.

Imagine that you are a typical Burkinabé. You have a low life expectancy of around 56 years, and there is only a 28.7% chance that you can read. You have most likely only known one President in your life, Blaise Compaore, who gained power in a military coup in 1987 that culminated in the assassination of the President at the time, Marxist revolutionary Thomas Sankara.

In 2011, students in your country were inspired by the events of the Arab Spring and the death of a young man in custody to begin protesting the current regime. They burned down the prime minister’s house as well as the ruling party’s headquarters. At the same time, the military experienced a minor mutiny when soldiers demanded unpaid housing allowances in several cities across the country. Though the soldiers were soon paid their wages and the military returned to its posts, the tensions between the military, civilian population (mainly students), and government will continue.

Traditional huts in the Southeast of Burkina Faso

When politicians announced that they would vote to change the constitution to allow Blaise Compaore to stand for re-election yet again, Burkinabés emerged in protest. The government suspended the vote and President Compaore resigned and fled to Côte d’Ivoire. Protesters shouted slogans such as “It is over for the regime!” and “We do not want him again!” and became violent, marching on the National Assembly building in Ouagadougou. They stormed national television headquarters, and set the parliament on fire. In an effort to gain control of the situation, military forces fired live rounds at the civilians protestors.

The next day, Lt. Col. Zida was appointed by the military to lead the transitional government, closed the country’s borders, and suspended the constitution. People were furious and thousands returned to the streets of the capital to demand civilian rule. However, the army opened fire at state TV headquarters, resulting in the death of at least one protester.

Now, imagine that for the first time in 27 years and quite possibly for the first time in your life, you have the opportunity to vote for a new president in hopefully transparent elections. Just as the president recognizes your grievances and complies with your wishes to resign, just as you are celebrating the end of a regime, the army seizes control.

These emotions and growing tensions have had an immense impact on the current protests and will continue to have an effect on the country for some time. The protesters will continue to demand civilian rule and there will be widespread dislike and mistrust toward the military. Hopefully the protesters and the military can work together to instate a new government soon.

The international community has been watching developments in Burkina Faso very closely. The United Nations has condemned the military takeover and threatened sanctions, while the UN’s West Africa envoy Mohamed Ibn Chambas has promoted a civilian transfer of power. The United States has also called for control of the interim government to be handed back to civilian authorities. The European Union also released a statement before the president’s resignation, with a spokesman saying “the European Union believes that it is up to the people of Burkina Faso to decide their own future. Any solution must be the result of a broad consensus and respect the constitution.”

The African Union and regional body Ecowas have been instrumental so far in pressuring the military to step down. The AU has said that the military acted unconstitutionally and is implementing a two week deadline, beginning November 3rd, by the end of which the military must step down, while Ecowas leaders headed to Burkina Faso on November 5th for talks. Presidents Macky Sall of Senegal, Goodluck Jonathan of Nigeria, and John Mahama of Ghana are aiming to hold meetings to pressure the military into a quick handover of power.

It would seem that the army currently has few options. To retain control would be foolish, as the UN, AU, Ecowas, and many of its allies have demanded a return to civilian rule and would impose sanctions if the army tried to stay in power. Lt. Col. Zida seems to be willing to comply with international demands in transitioning power within the next two weeks. Therefore a return to civilian rule seems imminent, but who will stand for election? Will an opposition leader, such as prominent figure Saran Sereme, gain power, or will it be an established politician?

The outcome of this change will have an effect across Africa. It is interesting to note that other long-term African leaders, including President Thomas Boni Yayi of Benin; one of the longest serving African presidents, Denis Sassou Nguesso of the Republic of the Congo; and President Joseph Kabila of the Democratic Republic of the Congo are also nearing the end of their constitutional terms in office. They will no doubt be watching the situation in Burkina Faso very closely over the coming months.